Do you know that there are seven types of learners? I’m majorly Kinesthetic, Spatial and Logical. I wish my teachers realized this before they caught me sleeping and forced me to sit in front during their class. I make visual notes compulsorily. That’s the only method I’ve derived after years of nagging, missing social science lectures and failing in moral science. (Yes! we had written exam for moral science where compassion, humility and sympathy were a few chapters. Gladly, I slept throughout)

During India Fellow Induction Training, a year ago, in February 2018, I wanted to escape humiliation for sleeping during the sessions. As I was new to everyone, I was concerned about being judged or bullied. What did I do to survive then? I sketched everything that I saw around and found interesting. It gave a leap to my kinesthetic nature and helped me improve as an illustrator. I ceaselessly practiced this everyday and realized that mundane classrooms were now different. Instead of being thrashed by facilitators and mentors, I received appreciation as well as affection. This freedom nourished me in all possible ways and filled me with unanticipated energy and confidence.

Though, there’s always something that you must learn to fight. This time I realized, it was Economics” Anupama, our mentor specially instructed to not dose off in this one session. For this might be one of the most insightful lecture for us. My sub-concious mind I suppose is a “rebel without a cause”; even after biting myself, scratching the paper off and trying hard to not dose off, I slept …

Humiliation knocked its doors and I felt ashamed. Tears rolled out! For my weakness was laid out and helplessness of controlling my own mind made it worse. Sometimes rationality hurts if others cannot sympathize with the emotions furling inside you. Many adolescent and grown-up learners face this pain each day. Anupama was furious. Yet, she controlled her anger and instead comforted me. And to prevent me from missing out this significant session, she asked me to write a summary over it and advised me to take help from few peer fellows, who were awake through-out!

Leaping forward five months, we came back to Delhi from our respective organisations for midpoint workshop in August 2018. My mentor decided to upsurge my creative energy and sculpt it into something more meaningful. She introduced me to the term, Graphic Facilitation / Graphic Visualization. And provoked me to practice it for these eight days for a dedicated prize money. A designer might step back if he receive only exposure for his work but if it comes with monetary inspiration, he submits himself. There’s a story behind, how Anupama came up with this idea and reward. (pssst … go & pester her with this question, if you don’t have enough already!)

Hereby, I dedicate my very first portfolio of Graphic Facilitation to Anupa-Maa, for this guided discovery. I hope these visuals will give you insight about the process and learning in our fellowship’s midpoint workshop. 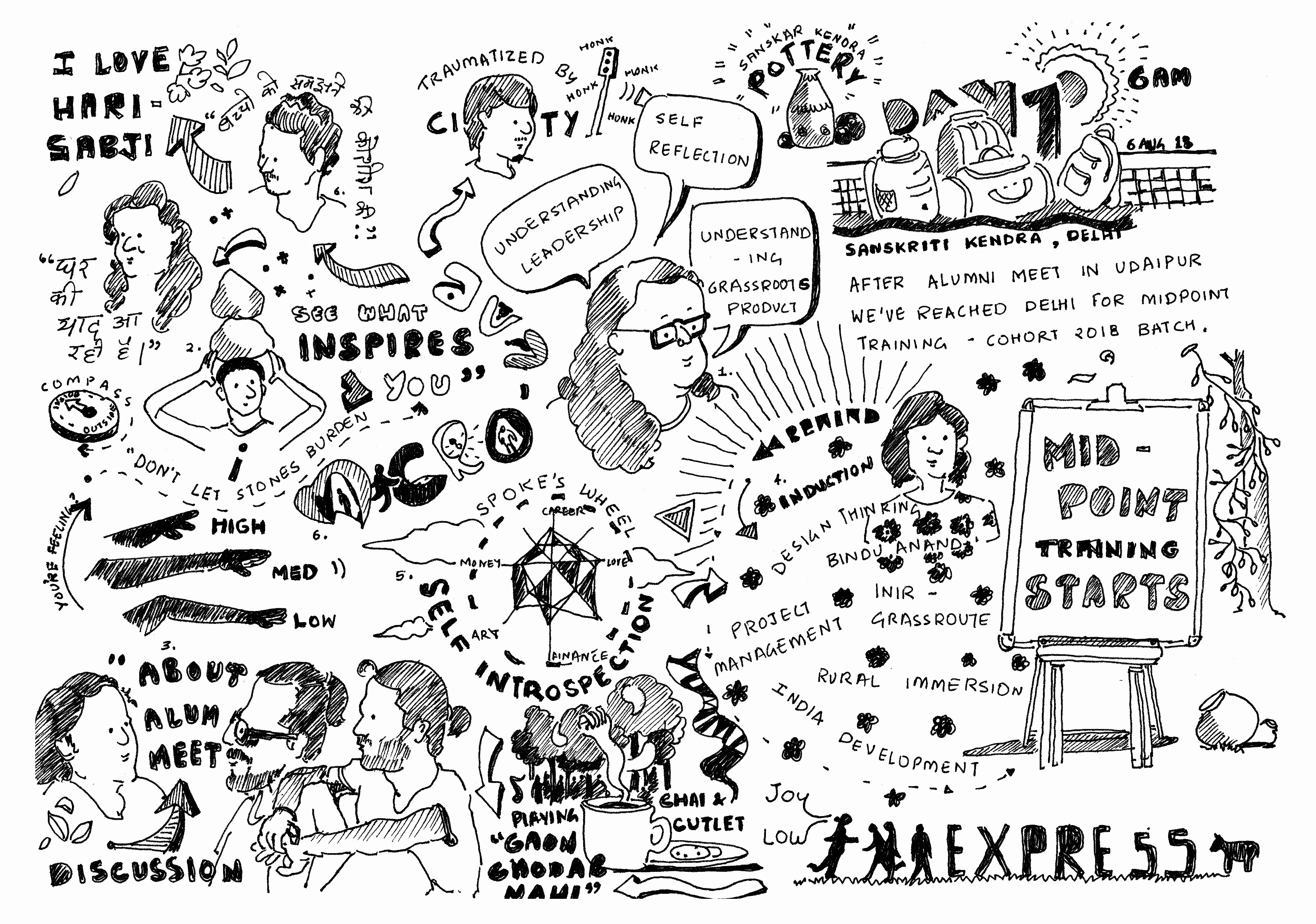 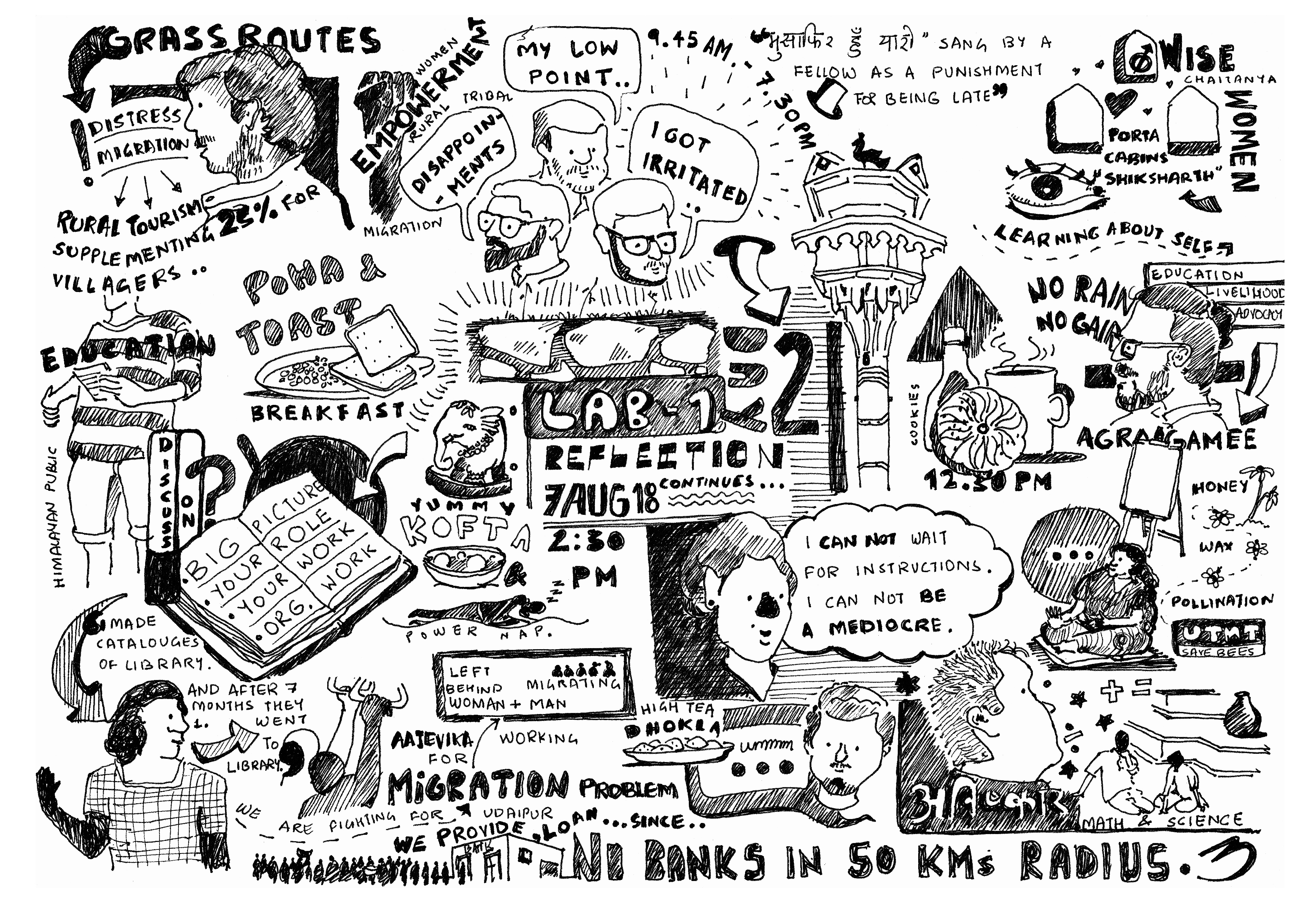 Day2 – Reflecting on Our Roles In Organisation 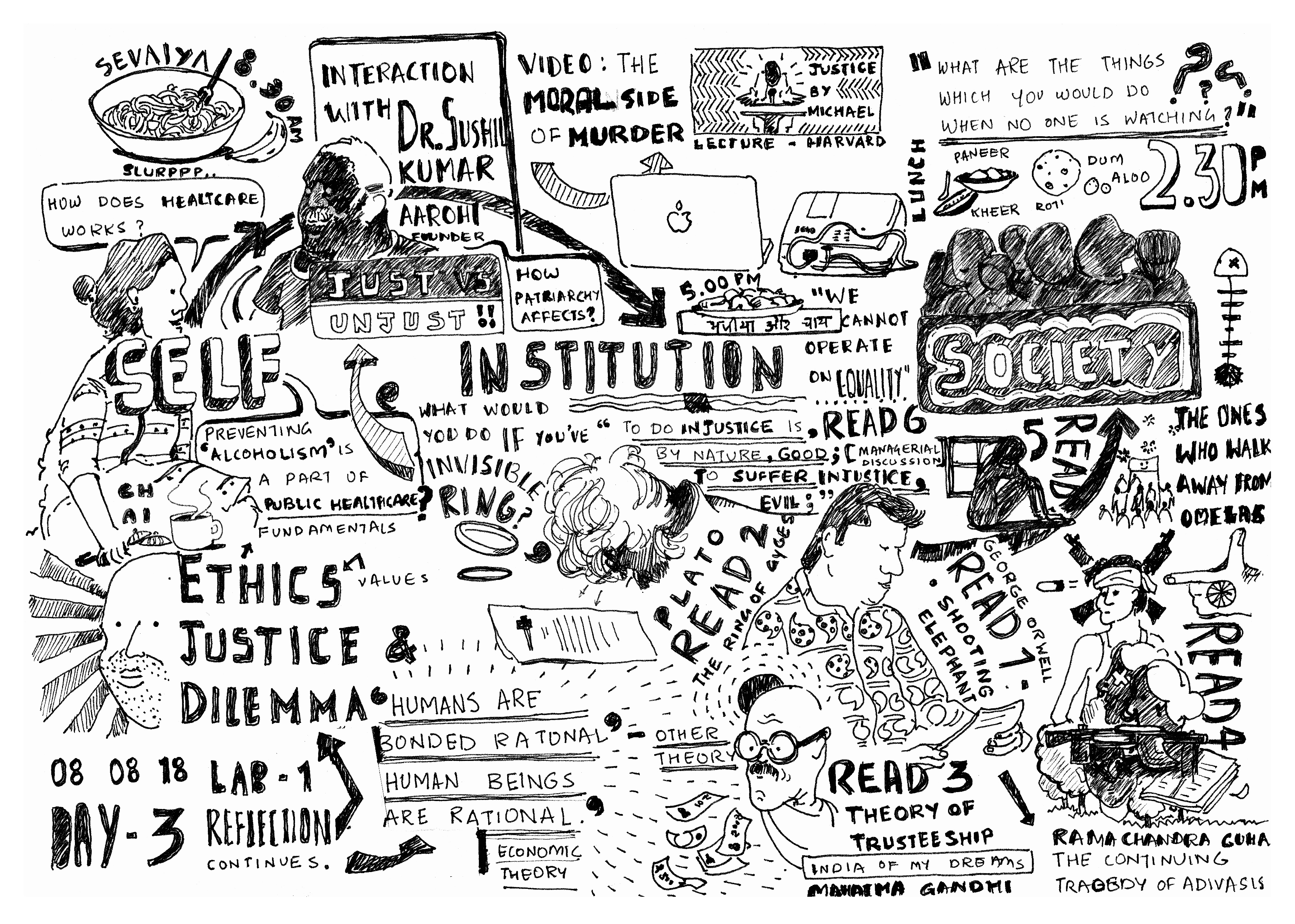 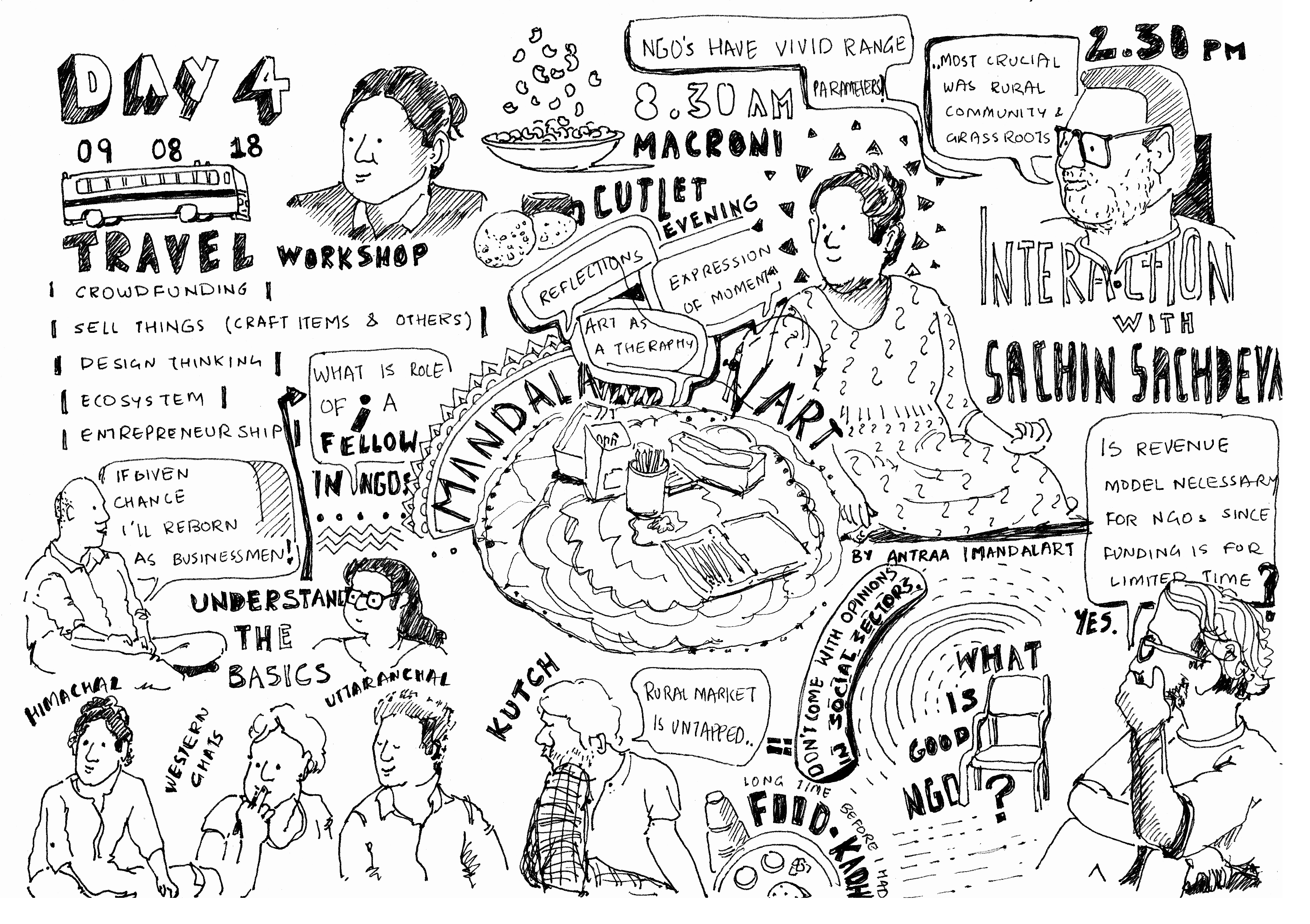 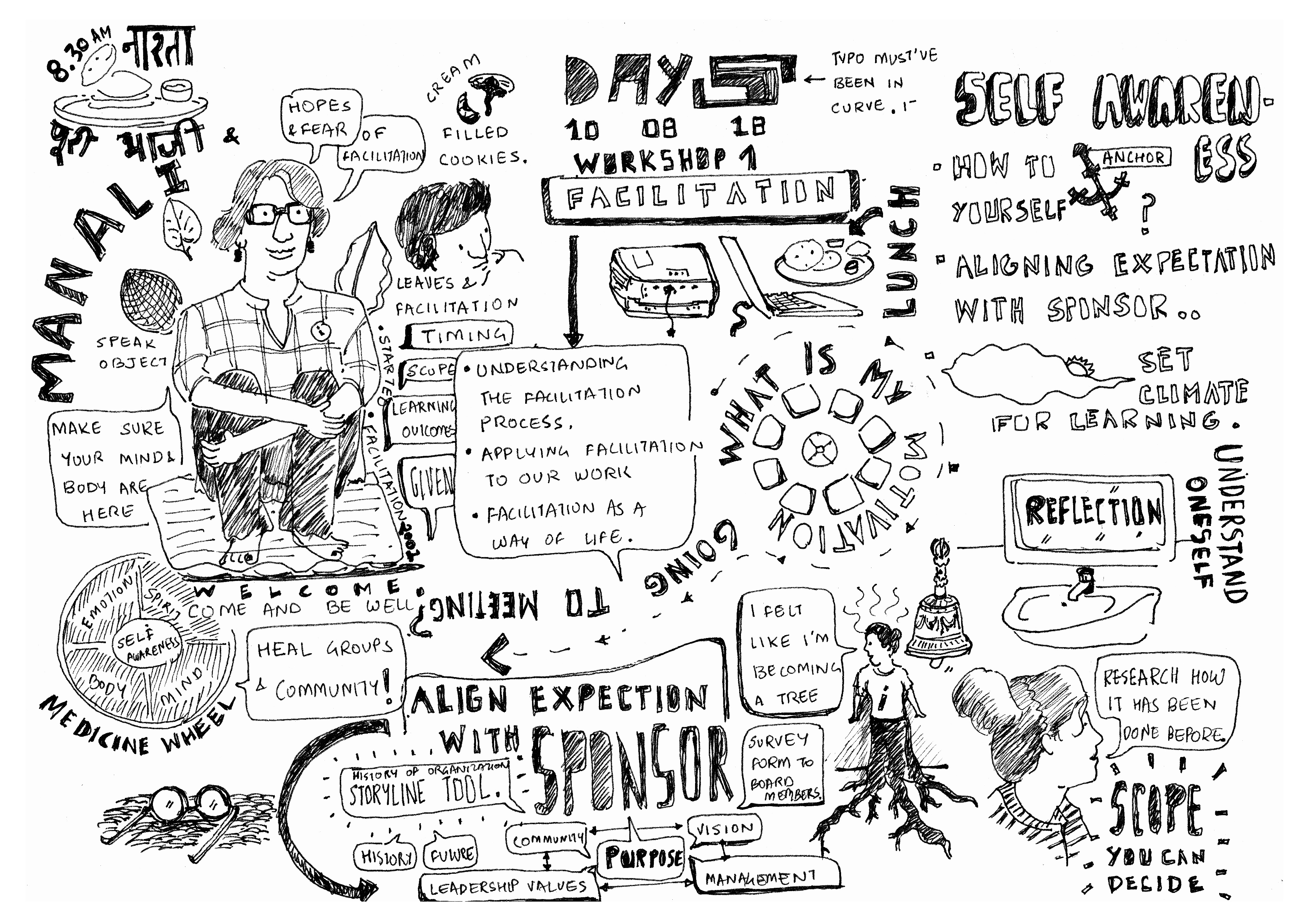 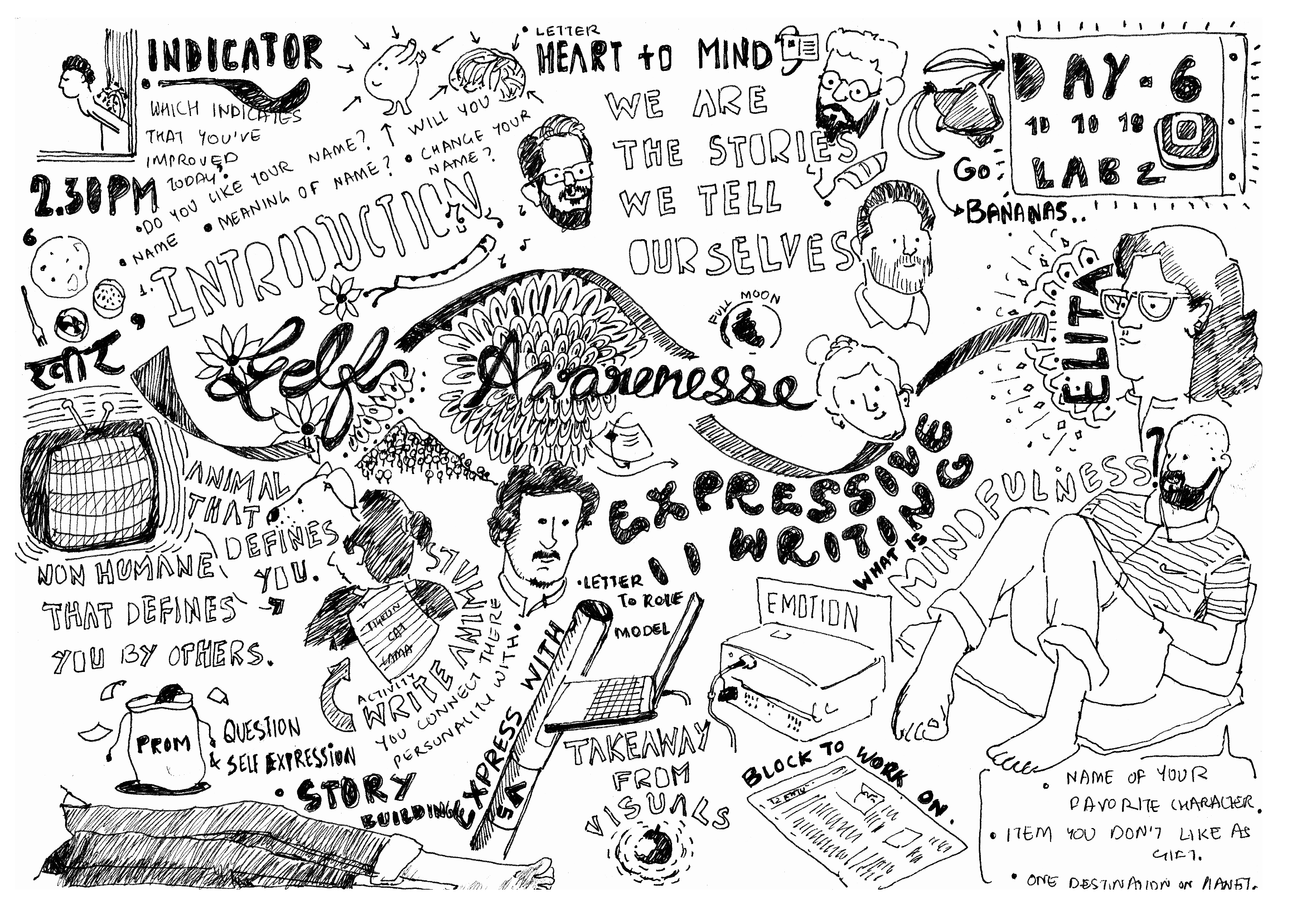 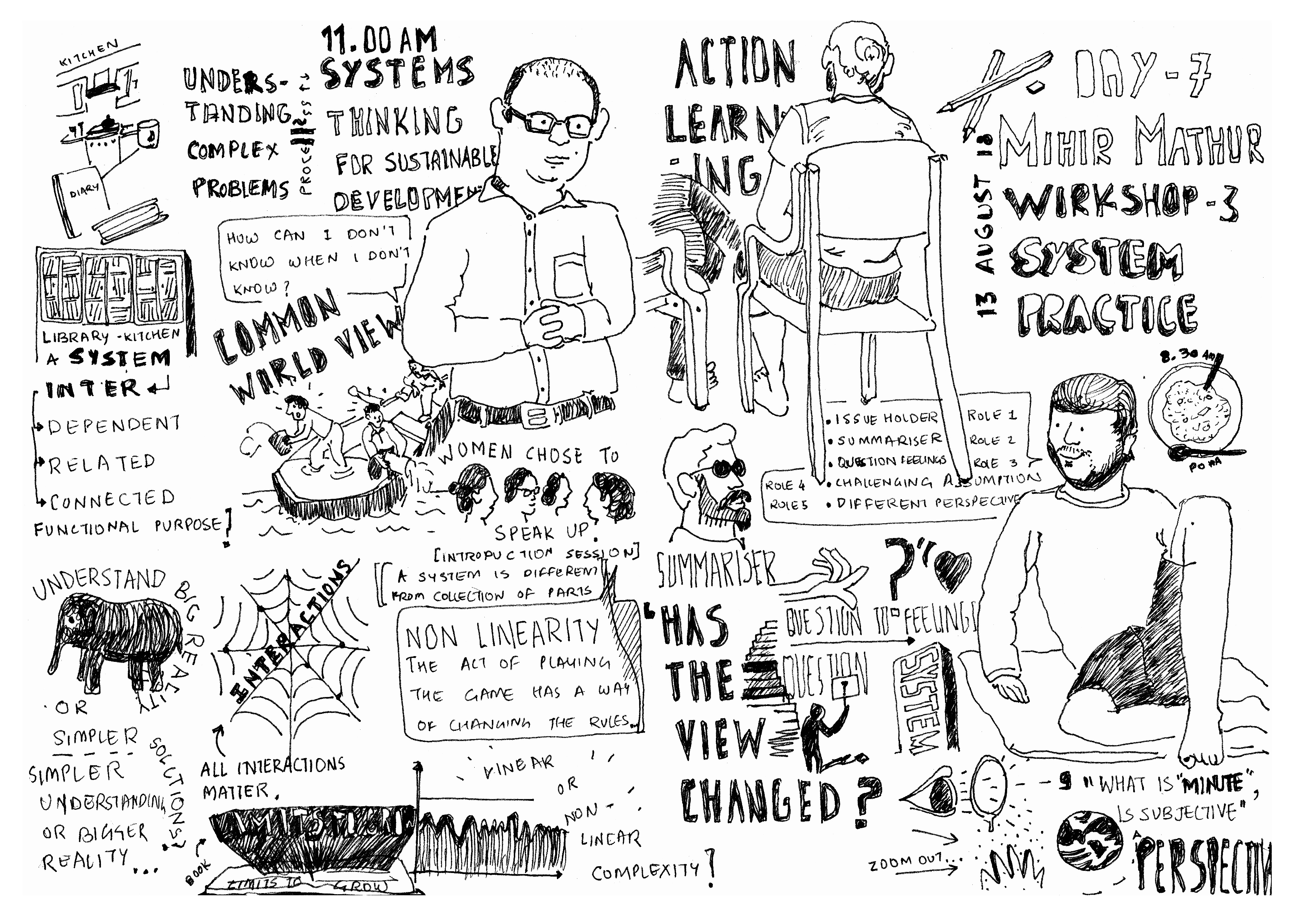 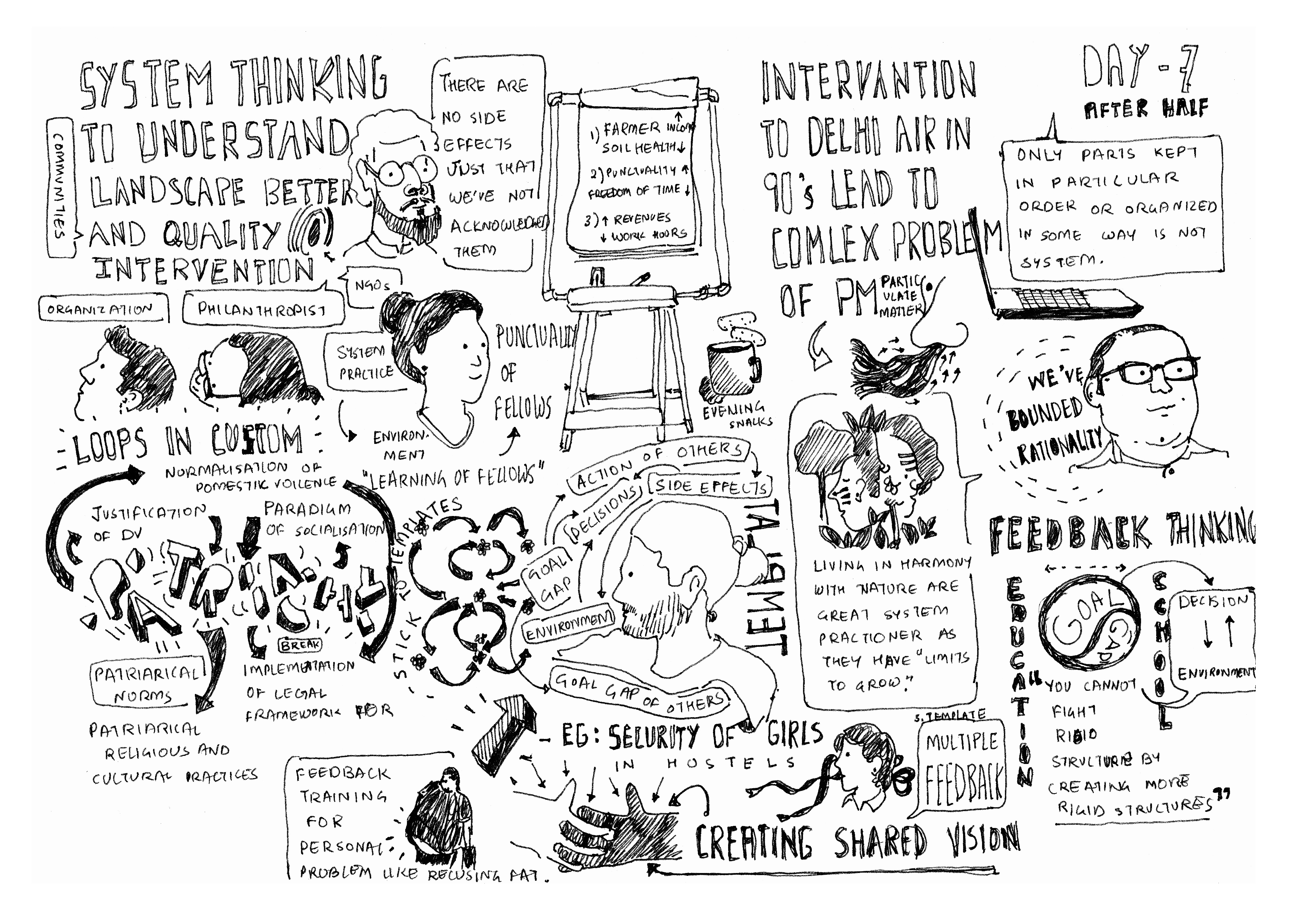 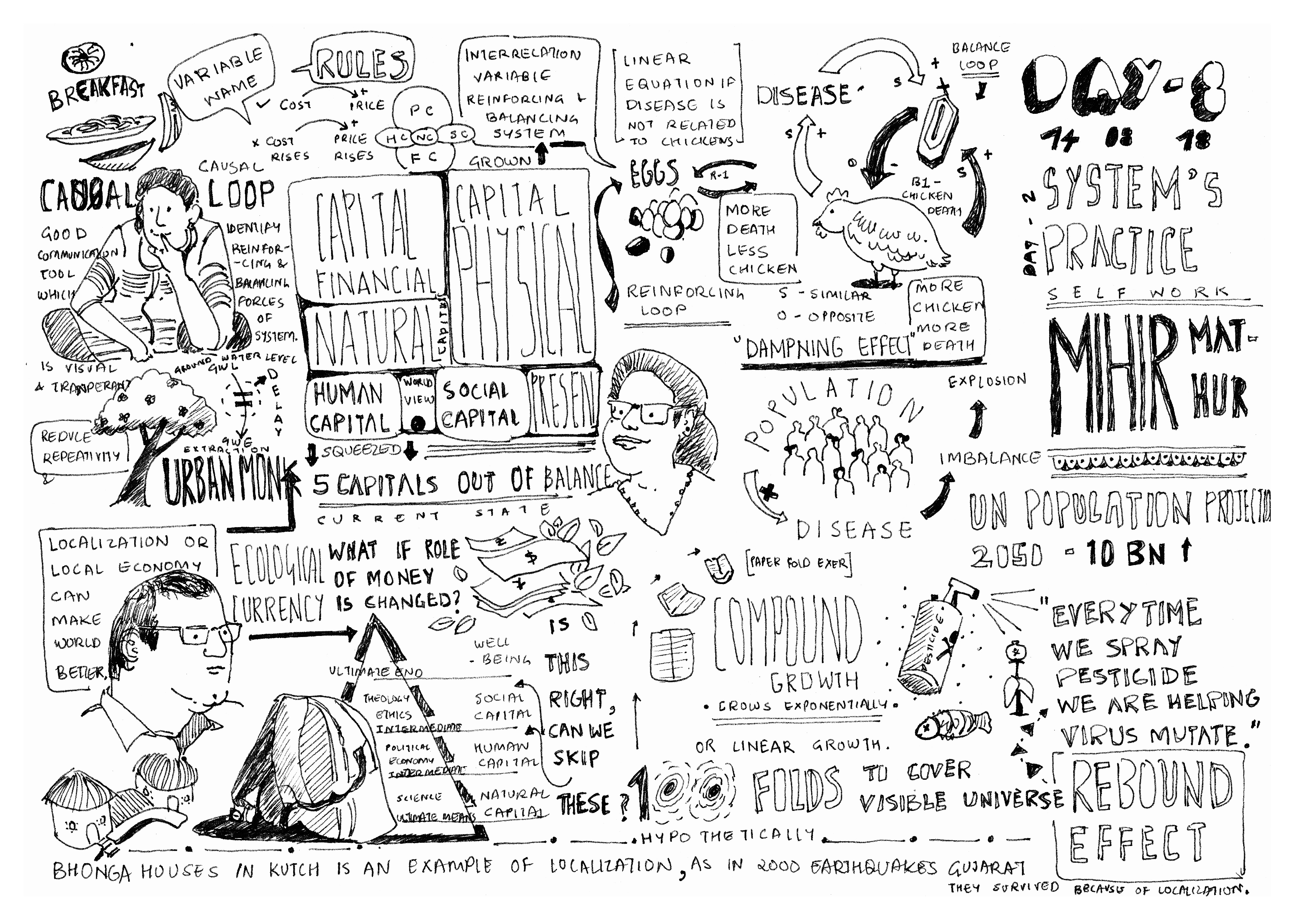 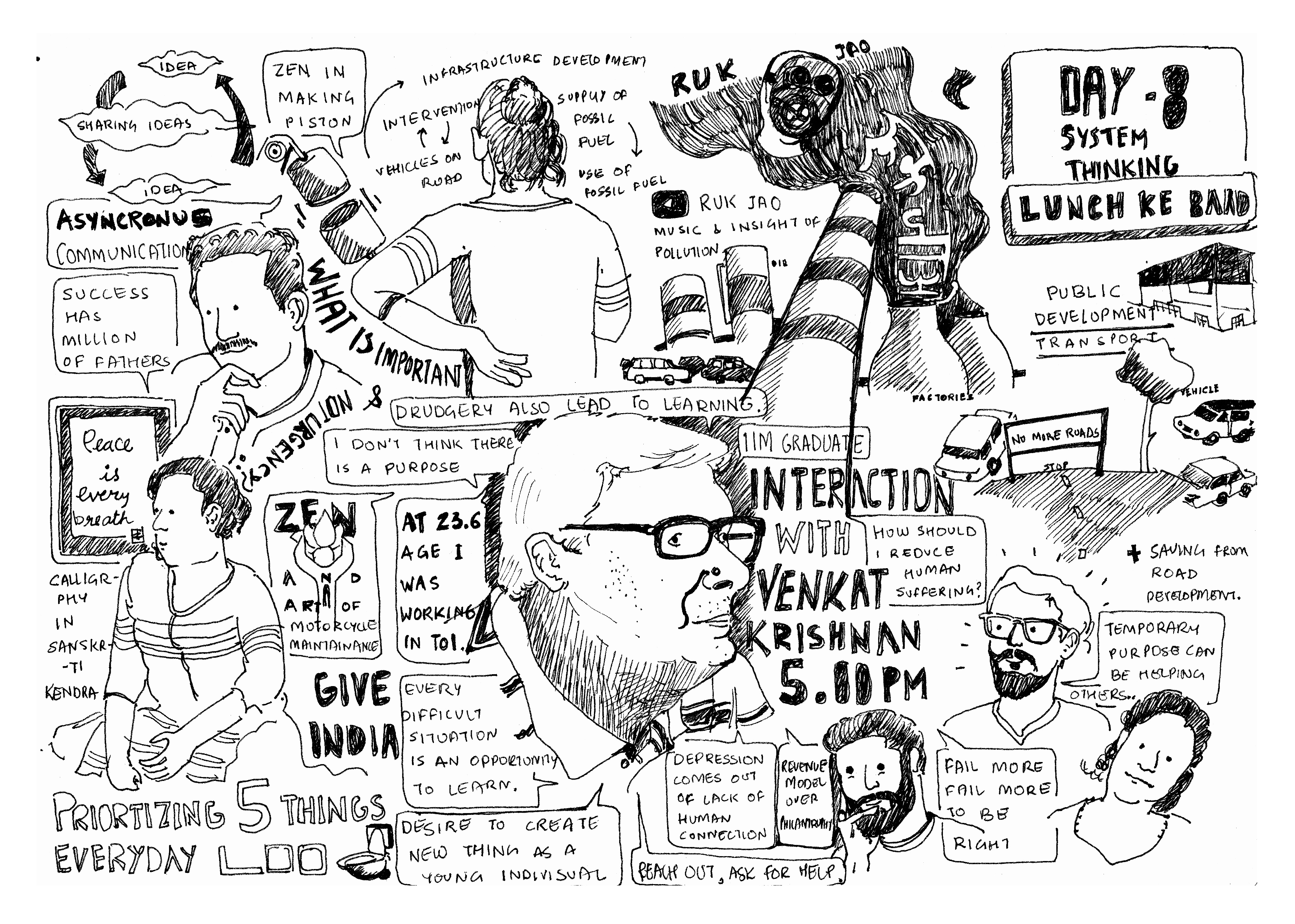 Thank you Swati for suggesting to post midpoint visualizations as a blog. Featured image at the opening of the blog briefly explains what is graphic facilitation.