A bleak light begins to flicker in one of Kathotia village’s households at 3 am. A long day awaits Sabo Devi*. She brews herself some tea, feeds and cleans the cow, gets ready and is on her way to work by 5 o’clock. Her daughter, Julie*, takes care of every other household chore, right from cooking and cleaning to taking care of her younger sisters. This small comfort of freedom from household work has come to her after many years of struggle.

With her father unable to secure any form of employment due to continued ill-health, the job of raising and feeding a family of 6 fell entirely on her mother. Every crop harvest was a call for her mother to visit her parents, assist in reaping, threshing & sale of crop, and come back with ration for the family. It wasn’t enough to meet the needs of growing children, so she began rearing cattle at home. About 10 kgs of milk was sold daily for Rs.150. “2 bade bhai the par who bhi kuch kaam nahi kare.”

Her mother spent every day of her life providing for the family by selling milk, churning some for hours at home on a chulha (clay stove) for ghee or making gowtha (cow dung cakes).

I asked her about her favourite childhood memory. She settled the pleats of her sari and averting her gaze (the one and only time through the entire conversation) said there wasn’t any.

In the winter of 1994, she turned 18 and soon after clearing her metric (10th grade examination) it was time to get married. “Mammi shaadi se pehle hi death kar gayi. Bina Tilak¹ ke shaadi karwaye.” Her younger sister was married into a family in Kathotia village of Kharagpur, and through them came the ‘rishta’ for her. The family didn’t even have money for two meals a day, let alone to shower someone with gifts. She was glad that the groom’s side dropped their demands and accepted a non-monetary proposal.

“Hum yahan aaye to dekhe matti ka hi ghar tha. Ek hi kamra tha”. While she talks about how her mother-in-law worked on fields and her husband didn’t have a job, I notice disappointment in her eyes but her voice doesn’t waiver. Raised in a poor family with no land of their own or fields to work on, she had never learnt how to sow, transplant or harvest crops. When she continually failed to meet her mother-in-law’s expectations, Soba Devi was asked to leave. She says it happened so quickly – she was shocked.

I wondered why she couldn’t seek help from her sister staying in the same village. “Behen choti na thi…uska husband kamata hai – kamai uske haath me nahi thi.” She said her sister never had to worry so much because her husband, a migrant labourer, sent her money to manage household expenses. She had to look after her own expenses, her own children, so how would she help? “Dukh sukh batate hain lekin use.”

After about 2 months of being helpless in an unknown place, she decided that she had to do something to survive. Over the few months since her wedding, she had become acquainted with a few local people who were aware of the crisis in the family and agreed to help her find work. “2 mahine baad samaaj bola kuch rozgaar de dete hain.” She began giving tuitions to a couple of village kids, initially teaching for free. “20-20 rupaya me 2 ghante padhana shuru kiye.” Sometimes people would pay her in food grains which she would graciously accept. “Khaana-peena ho jata tha. Jab log dekhenge ache se padha rahi hai tabhi na paisa denge”. Gradually, the number of children increased and the community began to recognise her efforts, but before she could even appreciate this little sense of security that her earnings brought, misfortune was ready to knock on the door. With her granddaughter in Kathotia

Sabo Ben taught children in a portion of the single room mud-house until 1998, when her continued persistence brought new opportunities. One of her in-laws asked her to apply for a post in Sarkari Anaupchaarik Shiksha program where informal education is provided to children outside of government schools. The income was a meagre Rs. 200 per month, and payments highly irregular, but now she had a government job. “Tab pati bhi saath me aake rehne laga.” She attributes her achievement to the village community’s faith in her. “6, 8, kabhi 18 mahine me paisa milta tha. Baaki log se paisa maang lete the – dekhte the kamaati hai toh wapas de degi.”

Her first child, Julie, was born soon after. The Anaupcharik Shiksha program ran for 3 years, till the year 2000, when a second baby girl was added to the family. With only one source of income left (home tuition) and one more child to rear, Sabo Ben bought a buffalo on loan. Her time was now split between rearing cattle, selling milk, giving tuition and raising two daughters. She was able to admit her eldest to Kathotia’s government school. The birth of another girl child followed in 2004, so she added another job to her profile – making khichdi (a simple dish of rice and lentils) for children at the Aanganwadi.

By now, people had begun to talk behind her back and taunt her for not birthing a boy. 2007 brought another girl. “Log hamare dulha ko bhi sikha diye ki doosri shaadi karlo, itni beti hain.” When he confronted her, she told him that he was free to leave. “Pati ko bole jana hai jao, hum apne aap sambhaal lenge.”

Unable to help myself, I asked her if she too wished for a boy. She replied, “Beti pe doosre ka adhikaar ho jata hai – toh kaise hoga? Beta hi to rehta hai ma-baap ke saath.” It was the most difficult time of her life, but she was clear about one thing – she would earn and live for her daughters.

A self-help group (SHG) was formed in Kathotia around that time. When Sabo Ben found out, she joined as a member saving Rs. 50 per month whenever she could. “Kaam ayega shaadi me, betiyaan hain.” While assisting Kamla Ben and Savita Ben, the women who managed SHGs in the area, in organising meetings, she learnt how to utilise funds better and began availing credit to continue supporting a family of 6 all by herself, just like her mother. She would time and again ask Kamla Ben to keep her informed of any work opportunity. Meanwhile, she began renovating her home with the help of loans to build her family a pucca house.

In 2012, she applied for teaching at the Aanganwadi.

Hopeful and a step closer to her childhood dream, she was almost sure that years of teaching children will finally bear fruit. However, her application was rejected. The Sarpanch wanted money, and she had none.

But all wasn’t lost. About a year later, an all-women’s credit cooperative was registered by SEWA in Bihar with an office in Kharagpur. She walked in for an interview and was selected to work as a Vittyasaathi (field officer). The association with Kamla Ben, she believes, is what saved her. Within a year of beginning work at the Cooperative, she got her eldest daughter married at 18. The only time I saw her eyes brighten was when she said, “Apne bal pe shaadi karaye beti ki dhoom dhaam se.” The in-laws asked for two lakhs in dowry but she could only pay fifty thousand. It took two years for her to repay that loan. She’s glad though that her daughter got to continue her education post marriage. “Dulha kharcha diya to beti inter shaadi ke baad kari.”

Her second daughter is now 18 and Sabo Ben’s already looking out for a suitable groom. On asking if her daughter will study further, she said that she will, but if they’re able to find a nice groom who will pay for her education then she’d like to get her married first. She earns a fixed salary of Rs. 2000 per month at the Cooperative which is topped by an incentive of 10,000-12,000 during months when collection is good. It helps her pay off her loans. Working at the Cooperative, however, comes with its own set of risks.

In December 2017, in a village called Tetiyabambar, a person was killed for money. “Sabko pata hai iske paas paisa rehta hai”, she says. “Sab mana kar diya, bola dhaandhli ho gayi hai, mat aaiye.” But even after the tension subsided, she was scared and didn’t visit the area for a whole year. That increased the number of defaulters which greatly affected her earnings. Some areas are still difficult to work in, due to Naxal presence. To ensure her children’s needs are taken care of, she never gave up her cooking job at the Aanganwadi. She leaves for field collections at 5 am, heads back at 9 am to her village where she organises about 40 kids for Anganwadi and prepares ‘khichdi’ for them, returns to the field for remaining collections and then reports to the Cooperative’s office to deposit the collections for the day. 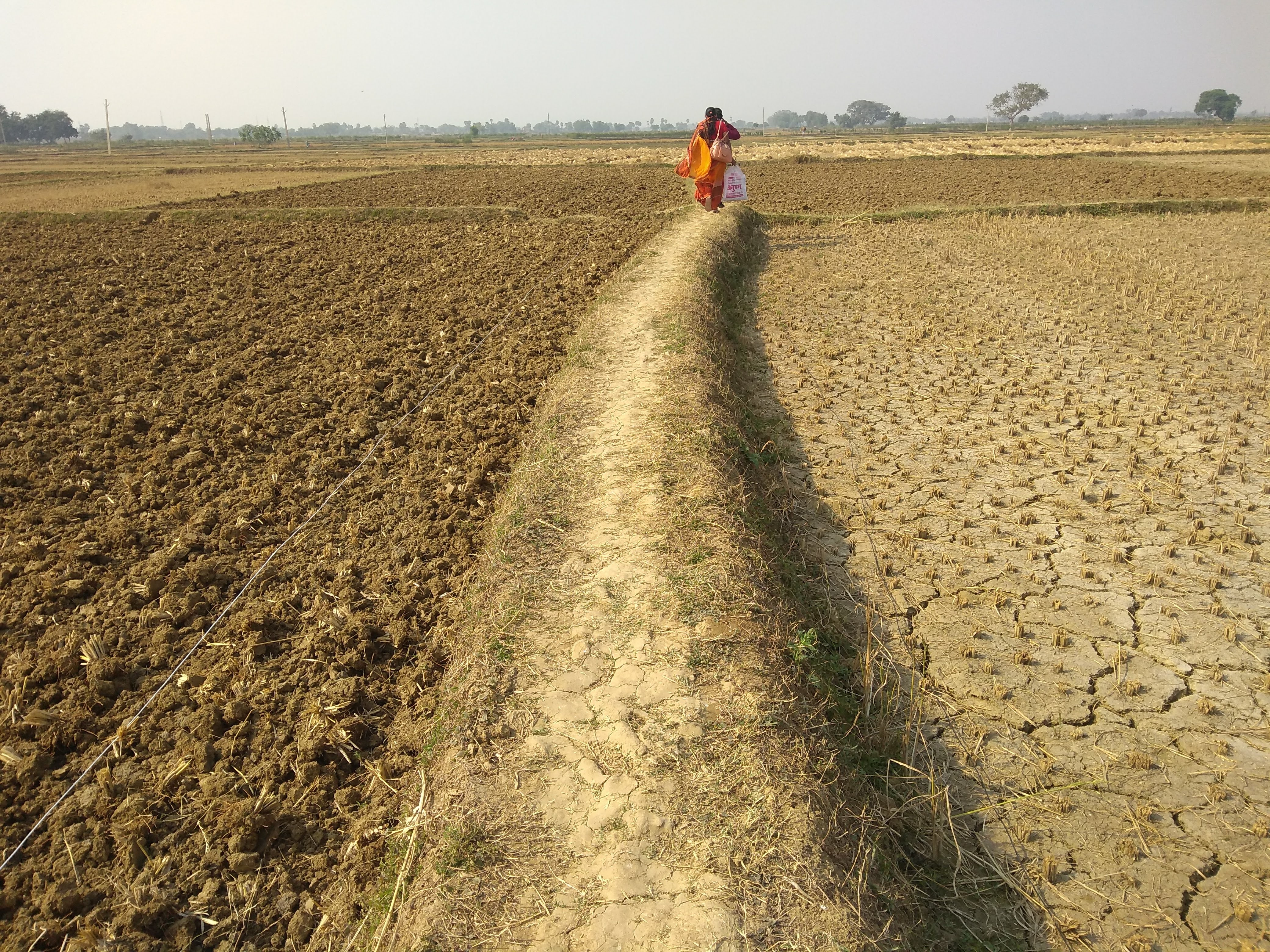 On my way to a remote village named Tilkari with Sabo Ben. No public transport is available for miles on this route that connects several small villages, so we took a shortcut through the fields.

Over the last 5 years, she has helped 100s of women learn about the Cooperative and its benefits. From one cluster near office to 50+ clusters spanning a 30 kilometres radius, today, she is the only Vittyasaathi in Kharagpur handling accounts of more than 700 members. She would meet a member, find out about her relatives, meet them and then visit their relatives – that’s how she grew her member base.

Kamla Ben, the Cooperative’s CEO, says, “Kahin bhi jaati toh poochti ‘tor mamiya-sasural kahan cho, tor nanad kahan cho, tor chach-sasur kahan cho’, aise aage badhti chali gayi.” From being hesitant and under-confident about her work & giving up on difficult dealings with members, to now being the strongest link to them, Sabo Ben has come a long way. She is still learning different ways of keeping women connected to the Cooperative and representing its objectives on field.

Until then, credit continues to be an indispensable part of her life. 11 loans over the last 12 years have helped her build a pucca house, purchase a motorcycle for her husband who drives her to and from work when needed, get her daughter married, undergo a surgery for an ovarian tumour, and much more. 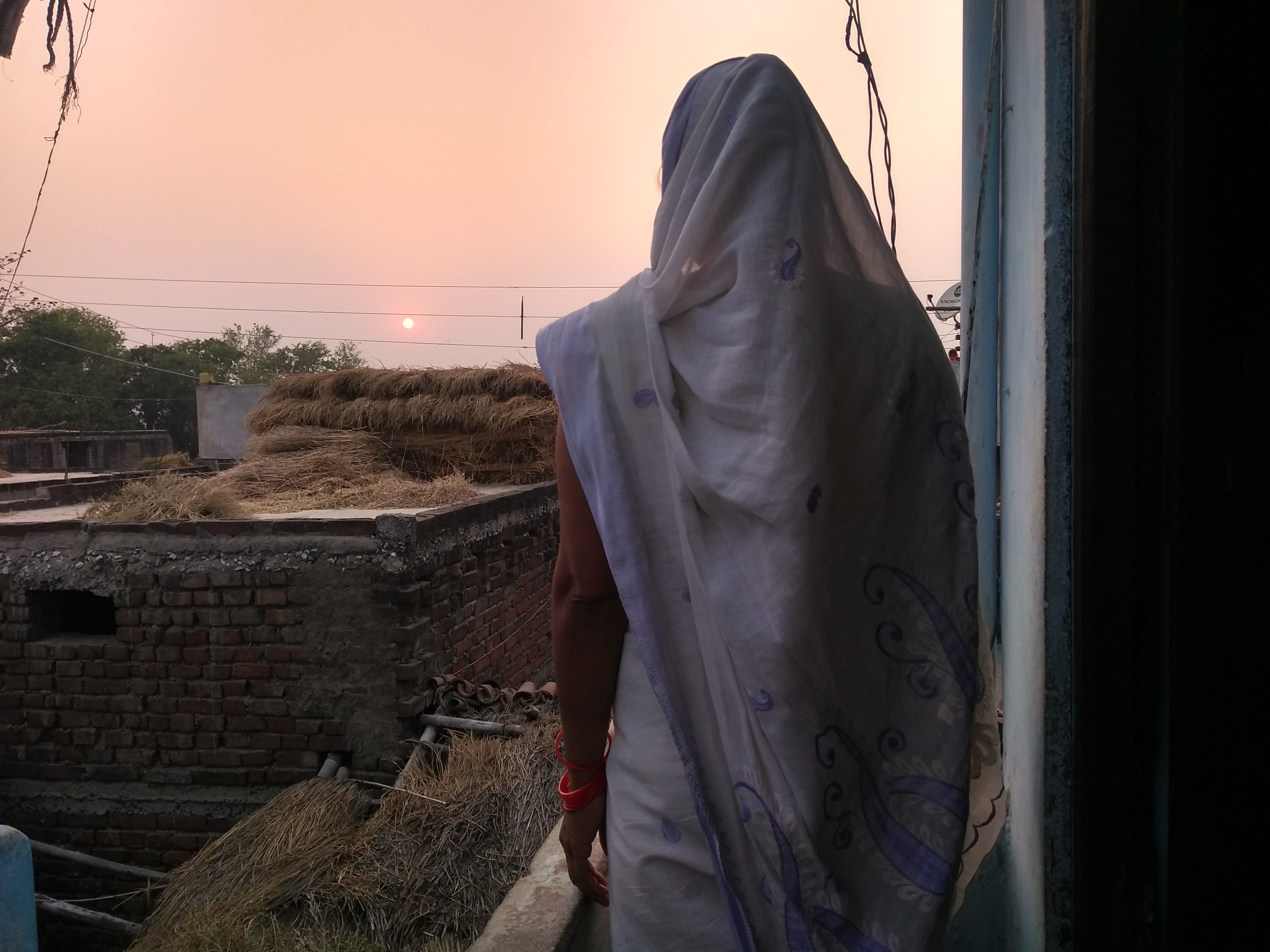 Sabo Ben watching out for her granddaughter from the newly built single room on the terrace.

It’s almost sundown and I have to leave. I ask her if she is proud of what she has achieved. She corrects me saying, “SEWA hai toh hum hain. Warna kahan jate, koi toh dekhne wala nahi hai.” I stress on the importance of her vital contributions, her struggles, single-handedly raising 4 daughters and providing for them – but she is not convinced. She attributes all her success to the society, with her daughters being her motivation to keep going. Her struggle to find self-worth in evident personal victories and indispensable contribution to the slow yet gradual inclusion of rural women reflects the deep-rooted misogyny and corruption in an exclusionary social system. Her story is not hers alone. It adds expression and context to different aspects of lives of millions of women across the world, and her realization of this holds an unexplored facet of empowerment.
Even now, when I look at her bright smile, it says nothing of the struggles she just shared. A smile, repressing so much more waiting to be unearthed.

¹Tilak is a Hindu wedding ritual where the groom is presented with gifts and money by the bride’s brother.