Those Who Fall Between The Cracks – Where Do They Go?

This lockdown was supposed to be different. Wasn’t everything planned to seem much more normal than last year? There are no heartbreaking images of migrants walking back hundreds of kilometres or those of workers stuck at inter-state bus terminals waiting to go back home. Instead, this year we saw a much bigger breakdown of our health infrastructure, tragic scenes from hospitals and crematoriums in the country’s biggest cities. Amidst all this, from last year to now, somehow the focus shifted from the poor and marginalised (who also occupy spaces in these cities) to the helpless city dwellers who were fighting for their share of resources.

The images of migrants don’t haunt us as much this year. Public memory is short indeed. Though we now know that Covid-19 has reached the remotest parts of the country, it is convenient to believe that we have done everything possible to mitigate a larger crisis, an exodus of workers from the cities. For reasons beneficent or otherwise, no Government dared to put a complete lockdown when cases began rising steeply last month.

The lockdowns and restrictions were much more phased, more worker centric, allowing construction activities, delivery services and essentials to function as normal, or so we thought.

In different pockets of Gogunda, a block in Udaipur, Rajasthan, interactions with residents and workers revealed an eerily similar story to what had ensued last year. More than fear and loss of livelihoods, this time, returning to villages also means a helpless state of affairs. 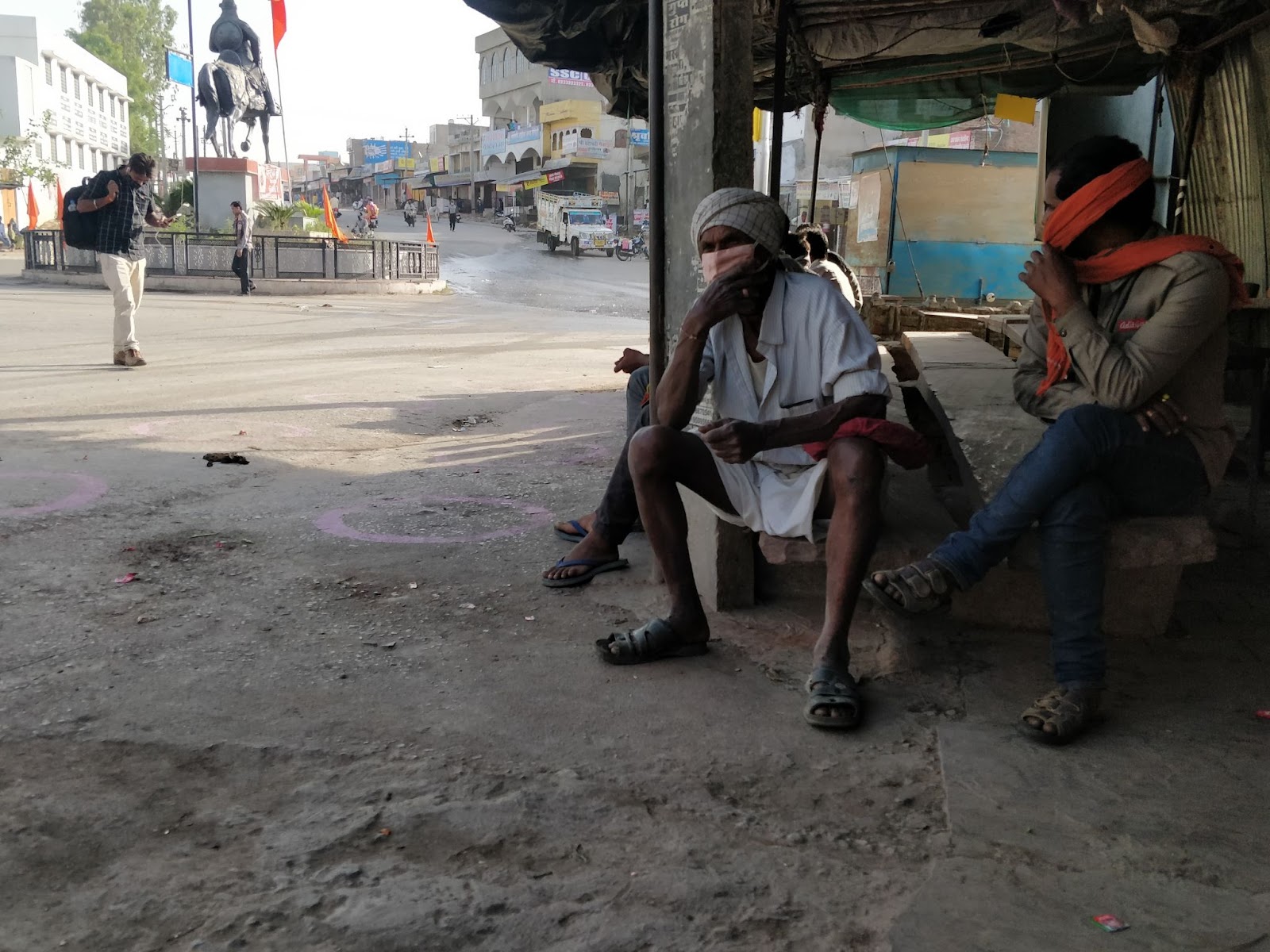 On one of the days, a group of workers in Gogunda was waiting for a bus to Udaipur. With my newly acquired ability to understand Mewari I figured out that the tone of the conversations was disappointing. They were quite convinced that the bus won’t arrive. Two of my colleagues and I went up to them. “Ram Ram baasa, kai haal hai?” “Bas, sab theek!” A few exchanges later, we got to know that all was not well. Owing to the lockdown, work was allowed only till 4 pm. Reduction in the working hours led the contractors to dismiss one hour break during the day which was earlier provided.

As we were chatting, one of them caught a glimpse of the bus and an expression of relief drew on their faces. One more day of work, possibly, that could be ascertained only after reaching Syphon Chauraha in Udaipur where the workers wait to be picked up by contractors and find work. Though the well-meaning policy allowed wages to come in as usual, working conditions were highly impacted.

Another conversation revealed that the transportation had become a major pain point during this lockdown. A few days back, I saw Ram Lal ji sitting outside the office stairs at 8 am. When he figured that I was walking towards the office with a bunch of keys in my hand, he got up and asked me “Kisht jama hogi na?” I nodded in agreement, opened the gate, got in and asked him to be seated on the chair. I would deposit his repayment in just a bit.

The jeeps that earlier used to pick up people from the villages and drop them at Gogunda have doubled their fares. Not that these jeeps weren’t overcrowded before, but now the workers have to pay more and also bear the increased risk to contract the virus while travelling with the crowd. Not only that, now the number of buses plying from Gogunda to Udaipur have also drastically reduced. “Police rok legi beech mein”, they say.

Technically, there is work but it has become more difficult to get to it.

One may think that if the worker was not dependent on the public transport, they may be able to reach their destination with ease. However, in another instance when I was interacting with a worker, he complained of police threatening and beating people up on the streets. “Kaam chal raha hai toh kya kare, police wale jaane nahi dete. Motorcycle pe dekhte hain toh danda maarte hain“. The vehicle to commute is not really the core of the problem. It’s the lack of clarity and complete absence of sensitivity by most of the administrative authorities while implementing the policy. If the government has allowed construction activities to function as usual, why aren’t people getting to work in them? 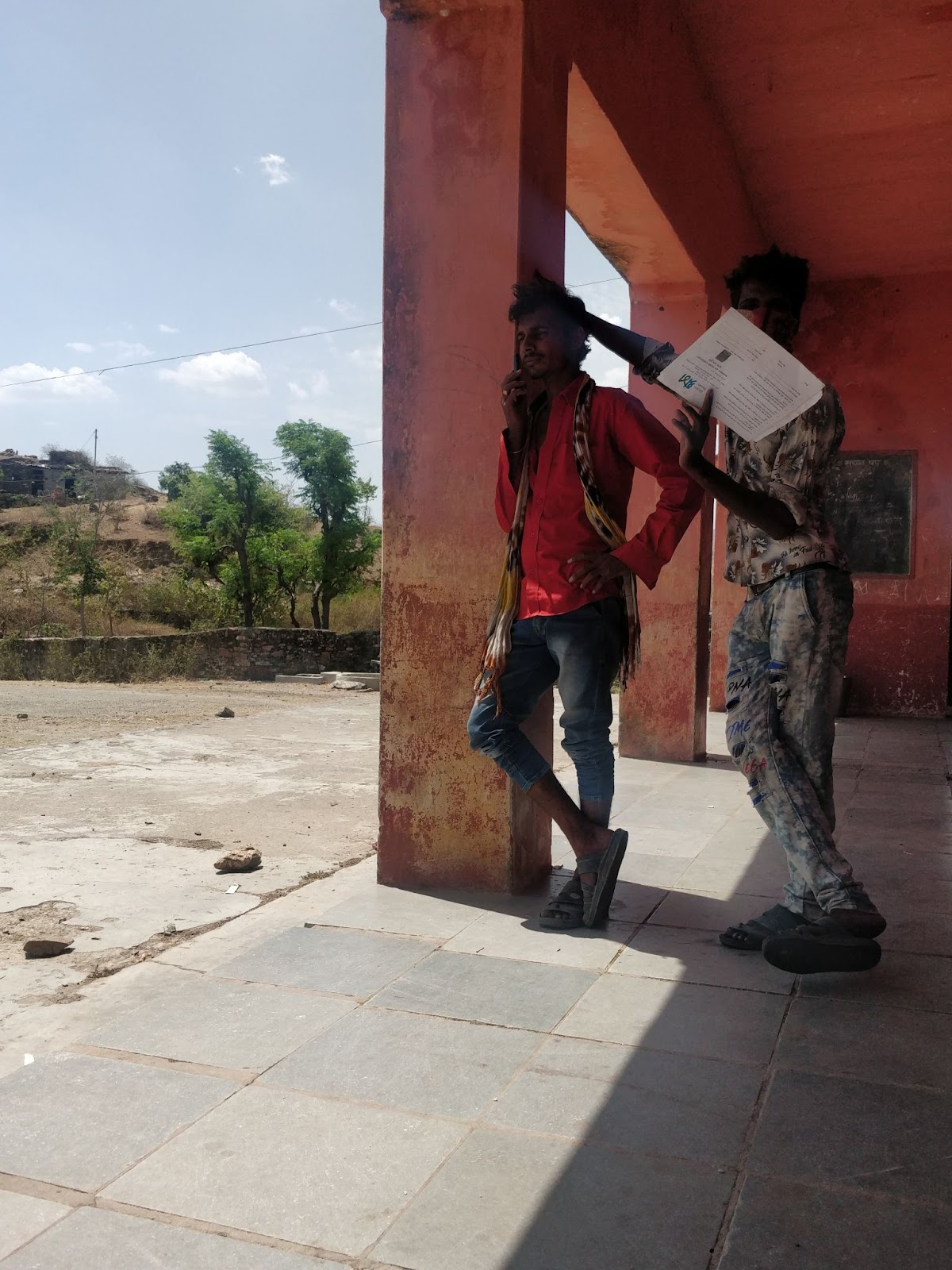 Another group of people I was interacting with, had returned from Rajkot – a popular destination for migrant workers from Udaipur. The clients, who looked not more than 25 years old, had come home during Holi and were never able to return. Now, they try to make ends meet by working on construction sites. Unfortunately for them, not only did they lose a better paying job as cooks in a city but also had to shift from a skilled job to an unskilled one of a construction labourer. That’s not all, the feeling to safety associated with getting back to their village, has also now eroded. With even construction work becoming hard to get because of the lockdown, they stare at completely uncertain times where nobody knows what could be done.

Naturally then, empowering these workers to start something of their own and taking control of their work will change things for better. It could be a small provision store or a grocery shop. Micro-entrepreneurship is an effective way to empower the rural communities to be self-sufficient. However, does micro-entrepreneurship really ensure a break-away from the dependence on external factors for livelihood and survival? Maybe not, especially in the times like we are in now.

Kirana shop owners, tea and snack vendors, bike repair mechanics who had in fact started their business after deciding to permanently return from the cities post last year’s lockdown, highlighted a different set of challenges.

For starters, because of the lockdown, the footfall to their shops has massively decreased. When people have uncertain future incomes, they spend less in the present. On top of that, procuring stock has become not only inconvenient because of movement restrictions but also expensive. Many shop owners report losing their bargaining power due to the limited time during the day for which the wholesale shops are open. The wholesaler, citing supply chain issues have started profiteering by charging higher prices. Sadly, the small retailer doesn’t have the flexibility to pass on the cost to the customer. “Aise kitne din chala payenge, band karni hi padegi (dukaan)” is what one of them told me.

In this second wave, while policy has allowed workers to function, the unintended consequences of these policies have certainly not helped prevent a disaster of last year’s magnitude. Administrative failure and inability to address the unanticipated impact has influenced these communities deeply. Probably the common thread between what we saw last year and all that is unfolding now, is the lack of trust in the “system”.

All this made me wonder why would someone deny help when it is being offered upfront? Why believe in conspiracy theories of the government wanting to kill the Adivasi communities by giving them the vaccine? Why is there so much disbelief in any system or institution? I thought about it for a few days and the more people I met, the clearer the answer became.

These migrant workers, who run our cities, work in offices and buildings, are the first ones to be isolated in times of a crisis. They are the “others” in our common spaces. This other-ing makes them lose their livelihoods, pushes them back into the same place that they were trying to escape in the first place. Every time a crisis hits us, be it an economic, health or social one, they are the first ones to lose their jobs.

This perspective made me realise that maybe they are not completely wrong in their denial. They have been shunned for the presumed safety of those who claim to own the cities. So, naturally, when you ask them why they don’t believe in the pandemic, they say “Yeh bimari sirf sheher wale logon ko hoti hai, hum jungle mein rehne walon ko nahi hoti”. Because they were alienated, they don’t see themselves as a part of this ecosystem or any ecosystem apart from their own village.

How can you then expect a rural community to trust you with their life when you couldn’t support them in their fight for their livelihoods? Why would they trust a system which has time and again proved to abandon them in a crisis?

Listening to all these stories on the ground makes me think whether we have really made sound decisions and policies when it comes to addressing the lives and livelihoods of migrant workers. What’s missing in our current narrative of the pandemic is that this situation is as much a migrant crisis as it is a health one. It is as much a problem of livelihoods as it is of life. Be it this crisis or any other, we ought to engage with the community to rebuild their trust in the system. This trust is imperative to have a dialogue.

We can’t prevent or decide what they do – be it the choice to migrate or reverse migrate, of getting into an occupation or setting up their own enterprise, of sending their kids to a school or not, or of visiting a formal health institution or a faith-healer. We cannot build trust by first imposing our ideas of what would be best for them but by facilitating what they aspire for themselves and directing efforts to identify the current gaps in the system such as communication, mobility, social security. We need to fill these gaps to prevent a recurrence.

Let’s not be disappointed that in a year’s time, little has changed in terms of systems or our ability to make comprehensive and sensitive policies, but learn from our flawed assumptions. What has also not changed is the resilience of those who continue to strive. Or is it distress disguised as resilience? But it wasn’t until these systems began to show their flaws that things seemed to be far from perfect, or if I may say, “normal”.

And those who fall in between these cracks, despite any efforts of the institutions and government, are not because of any fault of their own but because no one ever understood where they would go when they fall.