Science Of Nuns And Sisterhood

She was trying to get off two tiny ants from her arm. After struggling with one, I thought I might as well help her. To me, it looked like, a better way would be to rub her hand off and make the ant roll into a tinker of mud. And when I did it, “Awwhhh! Why would you do that? It’s dead now!” exclaimed the three young nuns. Quick enough, they calmed down to not make me feel guilty and made an attempt at pacification, “It’s just that their lives are no different from ours, they will kill us if we kill them. She could have been our mother in the past life, for all we know.”

These were all 14-year old nuns at the Dongyu Gatsal Ling Nunnery (DGL) in Jandpur, between Palampur and Baijnath in Himachal Pradesh. I had started visiting the place as a Math and science teacher in March to teach a batch of 25 of them. Their families sent them here to become nuns at ages 6 or 7. None of them probably even know what it would mean to become one in future, and yet, it is the safest option they have for a living. Being refugees in a country where the citizens themselves are fighting neck to neck for jobs, there could hardly be many career opportunities for these girls. They go to the nunnery and are at least in a place where they can seek peace and spiritual enlightenment.

Aavishkaar, the organisation that’s hosting me as a fellow, has been working at the nunnery for over a year now. All throughout the last 10 months, whenever I heard my colleagues talk about the sessions held there, “nuns” were whom I imagined with black gowns and white head masks, but I never realized it was the Buddhist nuns we were talking about. They were invited to visit us in Aavishkaar campus a few months ago and that’s when I saw loud honey-voiced girls donning red robes and yellow inners running clumsily towards the campus. They had worn sneakers under their robes and all sorts of gear to make them look like kids; backpacks, bottles and stationery that reminded me of my school days. They looked like boys as there was nothing visibly feminine or different from male monks about them.

How could I be so naive and not know that these were the nuns I had heard about all this while?  For me, teaching them was going to be extremely exciting. 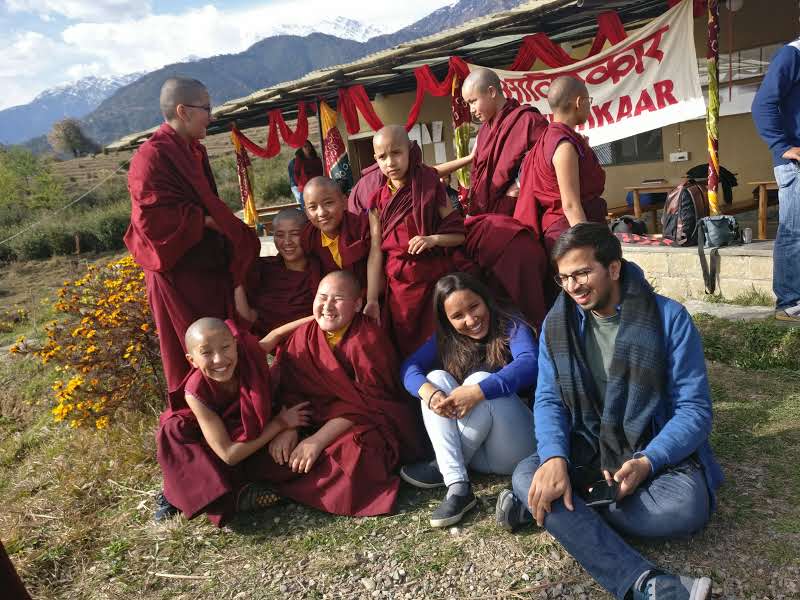 I had just returned from my holi-days at home and was told to accompany a colleague to the DGL nunnery. What a pleasant surprise! On entering their campus, my mind stopped manufacturing all the thoughts for a moment. It was a well-manicured, perhaps newly constructed campus which had Tibetan murals along its walls, painted in all colours possible. In the backdrop was enormous Dhauladhar mountain range, capped with snow at that time. 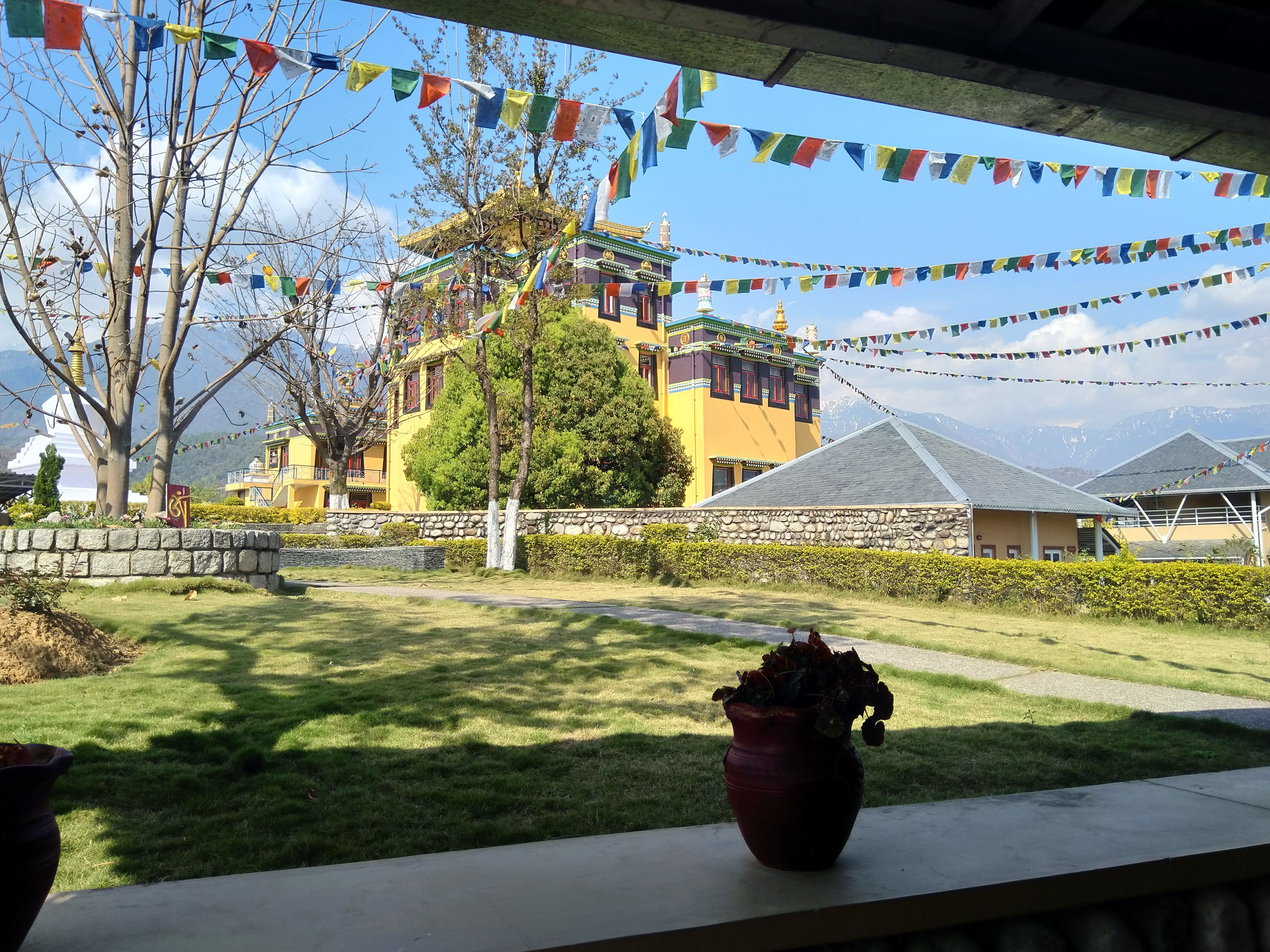 The first session I held with them was about fractions. It taught me many things I had missed out on, while working with students in government schools. It made me see the loopholes I hadn’t seen in the last three months of working on this topic. After their visit in Aavishkaar last time, I was expecting the same language barrier I had experienced. But this time they were neither shy nor looked unaware or hard to reach out to, when I was in their zone. Instead, some of them turned out to be complete math-heads.

They cracked patterns quickly. It was only their short attention span which would hinder me from delivering the content I thought to deliver in 3 hours per week. They were so full of energy that if my activities wouldn’t match up to their level, they wouldn’t shy away from finding their own interests around the classroom and completely ignore me.

Today was my second last session with them and I was teaching them a bit of science. Fortunately, before I was informed about this class being one of the last few, I had started my favourite science topic with them – Simple Machines. The reason it is my favourite, is because I see the simplicity of science best in this topic. I’m able to see the process and not just facts. For example, most of the objects we use in our daily lives are actually simple machines. Funnels follow the principle of inclined planes, our diving positions are wedges and things like spoons, forks and even books are all different kinds of levers.

Just having the awareness and an eye to look at objects from that perspective helped me become innovative and find ease in hard work such as washing dishes. I could use the design of tongs to make so many things like tongs, scissors and what not. It takes my level of dexterity higher when challenged to build simple machines myself. So, today we did it. After watching some cool Rube Goldberg machine videos, we built our own tiny models to transport a cube from one table to another. I wasn’t surprised at their creativity, but I was surely surprised at the way their attention span had increased over time. They understood everything I had delivered over the two sessions and tried their best to ideate and implement the same in the design challenge. 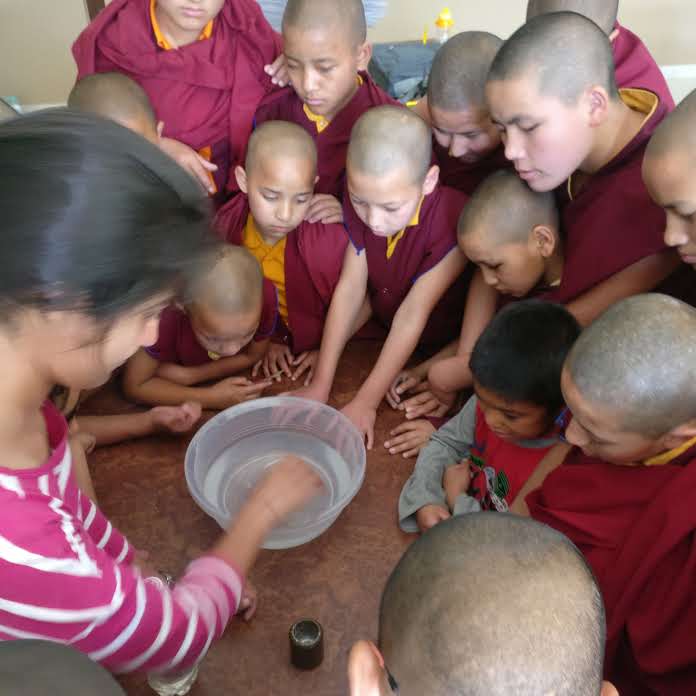 Rachna Shaldu had come from Kinnaur where she studied in a government school until class 9th. She wanted to become a nun and practice a life lived for others, forgetting the self. The first thing she was adorned with at DGL Nunnery was her new name, Yeshi Tsomo. Tsomo means “turning point for eternal goodness”. The other two changes were chopping her hair off and wearing maroon robes. She told why they cut the hair, and the reason was predictable. She isn’t a girl anymore but a new person now. She doesn’t come with her own identity. Hair would always be a distraction for girls, they say. It would mean spending time on combing, worrying about how it looks, if it has dandruff or when the hair starts falling. She seemed happy to let them go away. It’s much easier for her now that she doesn’t have to worry about maintaining her hair or having a family or a life after getting married.

“I would have to live for my husband, take care of kids and family; but I want to live for everyone, not just myself and my family.” She has now been in the nunnery for two years, teaches Hindi and a little bit of English grammar to other nuns. While she’s only 14, she wants to become a teacher on growing up. Will she be a nun-teacher, Tibetan teacher or a B.Ed. teacher?

The 10-year long course at the nunnery includes 6 years of education in Tibetan language, culture, and sciences, followed by at least 4 years of retreat. The word here means a meditation retreat where the nuns may choose to retire in silent meditation or solitary time in exile. There was a nun we met during the campus tour, who is a doctor. She learnt medicine from Tibetan institutes, through their own curriculum and degrees. Most of their emphasis is on teaching Tibetan culture including art forms. Dakini Dance is one part of it, which they perform annually. I was a witness to it, as they had their rehearsal between the sessions of math and science. Everything they perform reinforces their learning from Tibetan Buddhism of the Drukpa Kagyu Tradition. Elections happen annually at the Nunnery to appoint people for administrative duties, management roles, class monitors, etc.

Asha Rani Palmo, who is now Jamyang (Tibetan name for the Bodhisattva Manjushri) Dolma, is a 14-year old who has been staying in the nunnery for last 6 years. At the age of six, one day when she was sitting at the river bank on a high edgy stone in Lahaul-Spiti, the stone left its grip on the ground and slid off into the river, taking her along. Her chin cut open and the forehead still holds a scar. She says that it will now never come in her way because she won’t have to marry. That is one reason why the nuns are always relieved, at peace with spirituality and minimal obligations in life. They get to meet different kinds of people from time to time. Every evening they debate in their own manner, a hand-clap followed by an argument, which helps them discuss the ideas of Buddhism and really believe in them. They justify their beliefs and convince others to follow them.

While I was looking forward for this opportunity to interact with the nuns, when I finally did, I found only scanty difference between them and girls at Nari Gunjan. They are both passionate who thrive on sisterhood, live, eat and grow together; and vouch to idealise a life together. Recently me and my dearest co-fellow, Aishwarya, watched a movie on the Suffragette movement in Britain, and I realised that the most important movements in a country are a manifestation of community ties, unity on the basis of ideology and the likes, but the revolutions that help build an egalitarian society for women, all are result of such sisterhoods. Feminism too perhaps is an invitation to such a sisterhood; we just have to build a web of it.

Let me leave you with yet another video, a talk by Jetsunma Tenzin Palmo, the founder of this nunnery,