View as a pillion rider

From Kerala To Rajasthan Via Karnataka

My story started from a small village in Kozhikode, Kerala. I finished my schooling and graduation from there but I always had a feeling that it wasn’t enough for me. To expand my horizon and to challenge myself more, I started pursuing CMA (Cost & Management Accounting), and began my professional journey with HMT as an Executive-Finance in Bangalore, Karnataka. It was while working here that I decided to look for opportunities to work towards social development.

To my delight, I was chosen as an India Fellow and as a part of that, I’m now working with Shram Sarathi in Gogunda block of Udaipur for financial inclusion of migrant workers in south Rajasthan. As someone who had briefly experienced working with the government and in a start-up environment, I changed my career direction expecting loads of surprises ahead. It indeed turned out to be true.

It was all new to me; the place, the people, the work, the language! It was quite overwhelming and exciting at the same time. My initial days were about tagging along with staff members on their motorbikes in villages and building an understanding of the organization’s work with the migrant workers and their family members. Gogunda has its own charm and history. It’s where Udai Singh II died. He was the found of Udaipur city and king of the Mewar empire. Gogunda has also been the temporary Mewar capital. In its present day, it is surrounded by the scenic Aravalli hills.

When people ask me “How you are finding it in Gogunda?”, I say “Gogunda ka paani set ho gaya” (all set)

Everywhere I went, I heard the sounds of bangles and other ornaments that piqued my curiosity even more. One day I saw people in different kind of costumes. For instance, men were crossdressing as women, even as gods, goddesses and animals. When I asked my colleague about this, they said “it’s part of a local festival here” with utmost respect.

Gavari is a centuries old festive tradition of Mewar region where a tribal community called Bhil starts celebrating it 3 days after Raksha Bandhan (typically in the month of August) and goes on for 40 days. It is mainly celebrated in parts of south Rajasthan namely Udaipur, Rajsamand, Chittorgharh and Dungarpur. Gavari (Gauri) is the name of the goddess. The Bhopa (priest) invokes her every year. The person possessed by her energy indicates that their village is selected for hosting the festival that year. They consider it an honour.

The Bhopa goes into some kind of trance with their troupe in a public space like a school or a Panchayat Bhavan where the performance is taking place. They place an idol in the centre and perform around it. Eventually, the audience responds to this energy. This 9-13 hour performance includes mystical dance and music drama. For 40 days, the people in the Bhil community are abstained from eating meat, drinking alcohol, having sex. They avoid wearing shoes and eat a lot of greens. People believe that Gavari mata will protect them from all adversities. All the members of the village take part in the festivities except women during their menstrual cycle.

Every culture has its own nuances and nitty-gritty. When I got to experience such a diverse and colourful festival in a place like Gogunda, I was truly mesmerised.

A 40-day long festival sounds amazing, right? Maybe, may not! In these 40 days, men stop going to work as they are too engaged with the festival. They otherwise earn daily wages. So, not going to the work means not earning money for these days. I wondered “why leave jobs ‘just for a festival’”. The celebration also comes with huge expenditure. That, combined with loss of income for the households may mean borrowing/taking loan and people getting into indebtedness.

Cultural influence drives this financial behaviour. Hence, people don’t see it as inappropriate or a burden. Rather, it gives them a sense of pride and cohesiveness among kith and kin. However, I was unable to see how it can yield future benefits.

t dawned upon me how it was their vacation. Like I seek a holiday to getaway from all my responsibilities and everyday concerns for a while, they want it too, just in a different way. You get back to where you were, ready to face life again.

At the end of 40 days, most of them may have exhausted their savings, and might have taken a loan for running their household, they cherish the laughter, dances, rituals and late night conversations. They don’t complain about the festival and think of what it took away from them.

Every festival has a value. Gavari is also all about communal harmony and togetherness, and that makes it even more beautiful each year. If we question the rationale of spending on festivals when we don’t have much, we are really asking, “Is this worth it?” The ones celebrating and spending know better! 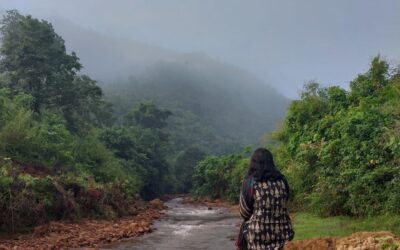 Breaking The Ice With Kalahandi, Odisha

Imagine this…the monsoon season has just said goodbye. You are sitting at the...