Not Losing The Context!

Humans possess the tendency to think, experience and form opinions. Each of us believes in some values or principles to form beliefs. These beliefs could be about anything, say faith, lifestyle, etc, but our experiences through life render them stronger. In elegant terms, we call it “the philosophy of life”. It takes a lot of time and effort for a person to form a belief. At least for me, it takes time to feel strongly about something and stick to it. I keep on analyzing and questioning myself to see if my belief is worth holding. One of such beliefs of mine is around context or relativity. Relativity is my way of discerning context on moral grounds.

‘Not losing context’ simply means that you consider all the aspects of a situation and then, accordingly move towards its solution. It is the study of consciousness which is deeply connected to what we feel in and around.

I have been fond of the word ‘contextuality’ since I read it for the first time in a design brief from Annual NASA (National Association of Students of Architecture) convention, 2013 for NARI GANDHI trophy. The title was “Contextuality – Time, Space & People.”

The brief starts with a famous Louis Isa Kahn’s quote “A city is a place, where a small boy as he walks through it, may see something that will tell him what he wants to do his whole life.” The introduction paragraph said “Our conscience is relative and responsive to everything around us – sound, color, smell, touch … architecturally, context is a stimulus that invokes a specific response, the ultimate solution. However, what is amiss in this equation is that we on our creative pedestals, nurture and protect the response so conservatively that we tend to ignore the fact that the nature of the stimulus that caused the response has changed. As the tag line of the theme suggests, the primary features of contextuality happen to be time, space and people. Nonetheless, as architects our prime concern is the “space” while we conveniently disregard the two most important aspects of architecture.”

This approach towards design thinking stuck with me and for the next four years of my architectural learning, each of my design solution was based on this concept. As such there is no philosophy in it, it is pure common sense, a necessity, a holistic approach towards solution-finding. It is self explanatory and includes all the aspects of design like surrounding elements (micro-site features), culture, the functionality of the space, indigenous style of construction, materials available, climatic conditions, user, and the period of construction. If being an architect, you don’t consider these things while designing, you can’t really expect the design to be efficient. The solutions will be like doctor giving the medicine for pain relief, to a person suffering from heart attack.

Theoretically, it sounds great. Right? Its applicability is challenging. When I first came to Kushalgarh in Banswara, Rajasthan (my field location as an India Fellow), the vernacular mud-houses and new construction happening in brick masonry drew my attention. The PMAY-G (Pradhan Mantri Aawas Yojana-Gramin) earlier known as Indra Awaas Yojana gives money to people below the poverty line category for constructing their houses. The use of mud in construction keep these houses cool during summers. These brick houses usually have tin roofs, which absorbs more heat than concrete slab construction. The brick construction is non-contextual on the basis of climate, culture, availability of materials and basic necessities like electricity. 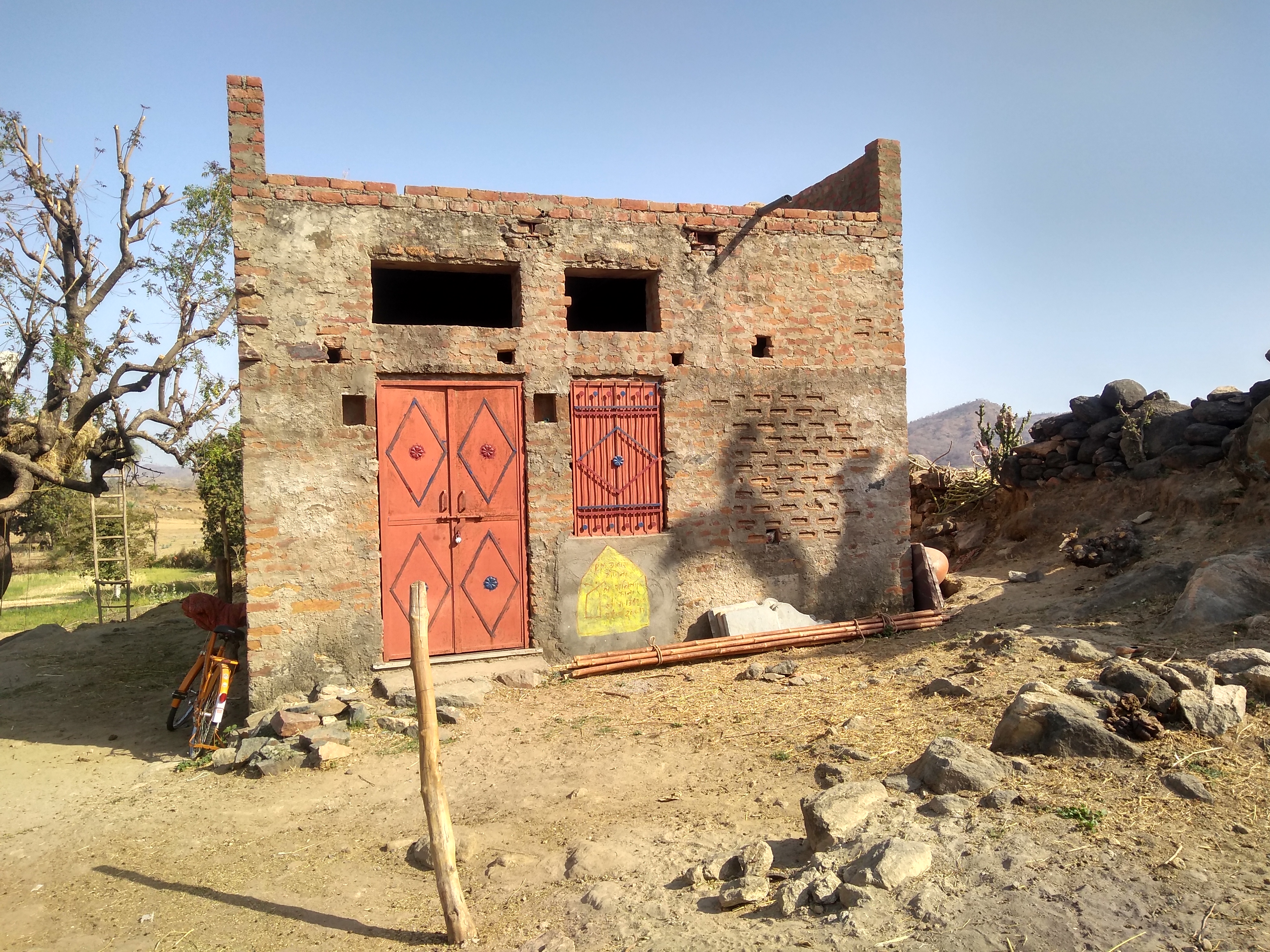 It took me some time to figure out, the reasons behind this shift. One was that the mud-houses need to be maintained yearly. Every monsoon, the roof tiles has to be changed and also covered with plastic sheets, to protect water from coming inside. Also, as these people migrate to cities for work, the yearly maintenance of the same becomes a huge burden. The other reason is that a large number of these tribal population works as construction laborers in cities and their desire to get a pucca house becomes natural.

I googled through the web-site of PMAY-G to understand if the government has regarded the vernacular construction in different regions. To which I found that, in some states the layout of a typical vernacular house is given. But the fact that the context of the same changes with time and the technological advancement in the vernacular architecture is completely disregarded. In architecture, the sustainable homes / vernacular approach towards design is adopted by the elite society. The idea is very classy and trendy. Some architects working in this sector, have made beautiful homes with this approach in cities, for the people who are rich and get all the basic facilities like electricity and water in their homes.

When I started working with Aajeevika Bureau, as per my bias, I realized this as a problem demanding immediate attention. Then the status of the education system in the community drew my attention. But after understanding the experience of the organization I figured out how health was the most critical and immediate topic to be taken care of. I had to leave my desire to help people through architecture and education which were more relevant. There are so many fronts on which I see its applicability. Recently, we did a base-line survey in Kushalgarh to understand the status of maternal health for women migrants in adjoining tribal villages. While discussing in a focussed group discussion regarding the increasing number of uterus removal operations happening in their village due to infection after female sterilization operation, we wanted to know more about their practices related to menstrual hygiene. A lady replied “We don’t get the facility of garbage – disposal car in villages, as you guys do. It is easier for you guys to dump the waste, but what about us? We use cotton cloths because there is no other option”.

This again raised a lot of questions in my head. That as part of the program, the government is providing free sanitary pads to adolescent girls in schools. At least awareness about using sanitary napkins (as we assume mostly) is there, but the problem is the disposal. The times when we, the privileged ones are getting aware to adopt other sustainable methods like menstrual cups to reduce our sanitary waste, these people are provided with poor solution to fix the problem immediately which would cultivate another problem.

One of my co-fellows recently shared an incident that happened in his organization. The organization works on livelihoods for the upliftment of tribal communities in Raigad district of Maharashtra. Their model involves forming S.H.G. Groups of three to four tribal women who are given training to make snack items like Ragi ladoos, papads, chutneys etc. Everything from the making, packaging and delivery of the goods is done by the S.H.G. The organization helps them with the market linkage, so that they get the best price for their products. One of the S.H.G. had to discontinue as one of the ladies did not abide by the rules. He explained in his blog, that the lady was confident and proactive in seeking opportunities and he could see some excellent entrepreneurial skills in her. But she was not fit for the model of S.H.G. that the organization has set up as she preferred to make the products by herself, and involved others in petty jobs like packaging, tagging, etc. Ethically, what organization did seems right as entertaining exceptions might have set the wrong example for others. But I am just concerned about a few things here. Shouldn’t we take it as a learning and understand that all individuals are not same and therefore will never fit into the same glass? Shouldn’t we be seeing the major goal i.e. strengthening of the community? If the bigger motive is set, then ways could be different. They could have also seen this as an opportunity to work differently with people like her. Shouldn’t we be more open to such challenges?

The contextual approach is people-centric which makes it more accountable. It is dynamic in nature as it changes with time and experiences. We have to be open to the thought that our solution could become irrelevant to the course of time or might not work for everyone. Understanding context involves being open to all the aspects of the problem and not sticking to our solutions.

I know it is not as simple as said, for a country like India with huge diversity, contextual approach becomes a romantic idea and India is not ready for the approach. People argue that universal and standardized approach can help people come together at the same level. But I understand it as, why should we create a problem at first place and then look for its solution. Standardization should be in terms of getting opportunities and rights.

Ignoring one’s context is like disrespecting their wisdom and roots, contextuality beholds scope for innovation and creativity in it and this diversity could prove to be a blessing if used efficiently.