I stayed for about 15 days with a family in a village called Sonkachh in Khandar tehsil of Sawai Madhopur district, Rajasthan. Sonkachh is a beautiful village just about 4 kms from the border of Rajasthan and Madhya Pradesh. The objective of the stay was two-fold. One, that I understand better and up close the reality of the village and people in terms of their social dynamics, daily routines, beliefs and culture. Since I would be spending about a year and a half working in this region, it only makes sense to understand these villages trying to be ‘one of them’ instead of being a complete outsider. This indeed gave me a good perspective, since I understand the people here much better now.

The second objective was that I wanted to do a situational analysis of the village which would include conducting Participatory Rural Appraisal (PRA), a concept that was introduced to me during India Fellow induction training.

My daily routine here was quite simple. I would wake up for a while around 4.30 am to the sound of a village priest singing “Hare Ram”, and would go back to sleep for another hour or so. The family would have a cup of hot chai at 6 in the morning, the only time they have tea.

Post this, men, boys and children go out for their daily duties. The women and girls finish theirs much before others even wake up. By duties, I mean taking a dump, since most houses here lack a functional toilet. People go out in the open in a few designated places, a little far from the settlements.

The first day when I went to defecate in the fields, was quite eventful as my leg got stuck in the mud after I was done with my business. I can say without any hesitation that I had the most scenic view during these 15 days of my stay even though it was freezing cold. I was guided about the process before my first time, and grew independent to visit the site on my own. While returning, people pick up mud on the way. It is used as soap to wash hands.

We then take up the task of bathing. The electricity has to be on, since bathing happens with the motor running. Warm water from the ground flowing through the pump is used for taking bath. The water here is too hard and soap does not work. So people use shampoo as replacement, preferably the one rupee sachets. In the words of an uncle ‘zyada fayda hain’ than the large bottles.

After these tedious processes of cleaning and sanitising oneself, we go on to have breakfast. People in Sonkachh generally eat twice a day. On the days when they go to field, they pack the lunch and eat thrice. Staple food is a version of roti which is thicker and heavier than the usual. It is accompanied by sabzi or dal and sometimes my favourite – fried chillies. During festivities or other special occasions, people eat dal baati, churma or poori.

I witnessed something peculiar in the houses. The food was being prepared on two separate chulhas, individually by the mother-in-law and daughter-in-law of the house. Unable to understand the need to cook food separately, I was intrigued. As I grew closer to the family I was staying with, I asked the reason to which I was told that post wedding, the son runs a separate account. He gets the oil and other cooking essentials separately and manages his household independently, in spite of living under the same roof. This may not be the norm in all houses, but I saw it where I stayed.

Let me introduce the two cutest members of the family, the youngest and the oldest. The youngest one slowly grew fond of me and used to call me ‘Babo’. With Dadi, the oldest, I had really good conversations around the chulha, even after not understanding each other’s dialect. She would endearingly say, ‘Khana kha lo ni’.

Understanding people’s lives in Sonkachh would remain grossly incomplete without going to their agricultural fields. I accompanied them at their workplace, plucked mirchi (green chillies) as they did and tried cutting wood logs for fire. The land holdings have been divided among the father and sons, and they reap the benefit arising from cultivation separately. The women end up doing tremendous amount of work on a daily basis, both in their fields which they call ‘maad’ and back at homes, such as cooking and other household chores, having little or no free time on most days.

Being a part of their family also meant accompanying them to any festivities and other celebrations. When I was staying with this family, one of their close relatives’ wedding was planned in another village. I got to witness, although for a short time, how it was culturally different. There were three more weddings happening in the vicinity and I took the opportunity to join one of the baraats for some quick ‘dance steps’.

Every once in a while ‘Hanuman Jagrata‘ is organized in the village outside the Hanuman temple where the musicians sit all night and sing songs in praise of the lord. Sometimes I wonder if this lifestyle is more happening than that of the urban folks.

I took a random stroll on one of the nights and found these men outside a small kirana store close to the house where I was staying. I casually had a chat with them, irrespective of the hindrances caused by the dialect. They were intrigued by my stay. Post this interaction, surprisingly, most villagers knew the distance between their village and my native place, Bengaluru. They must have Googled it, I assume! 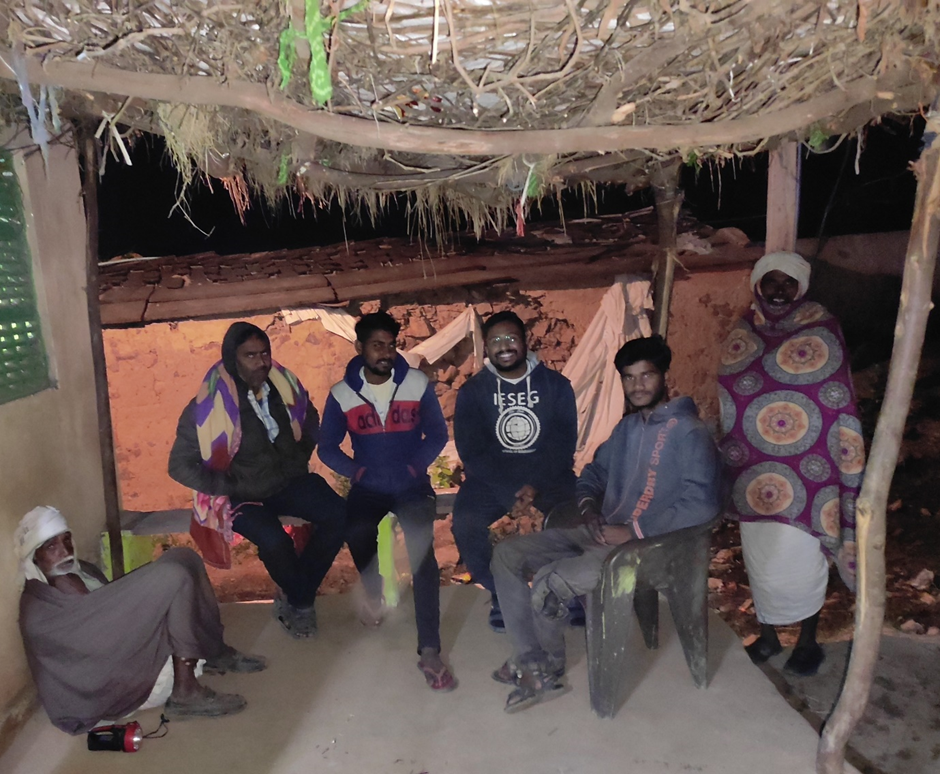 These are just some of the aspects I saw and observed in the village. The family is surviving on minimal means, but their hospitality was rich. They consider me as one of their own. it was really huge for me when they asked, ‘Wapas jaake hamein bhool toh nahi jaoge?‘. A couple of months later, I am still invited to their house for festivities. The kid calls me ‘Babo’ over the phone and it fills my heart.