Bihar Unfolded: You Need To See It Before You Judge It

“How many times in our lives, had we known with certainty that something happened in a certain way, only to discover later that it wasn’t true? How many times has our lack of trust within us made us judge other people unfairly with our conceited ideas, often far away from reality.”

These are the words from an article I recently read and immediately realized how I have been in similar situations. Here, the writer has talked of preconceived notions about people but in my case, it extended to places, things, environment and surroundings of daily lives too.

How quick are we human beings, in making judgments about people and places we don’t know. When I first got to know that I will be placed in Munger, Bihar, I immediately created an image in my head, of people fighting on roads, bullets being shot, overcrowded trains passing by, men in bell bottom pants, women whose heads are covered with sari, gold chains around their neck and in the middle of all this, me standing with a big question mark inside a cloud emerging from my head. Next came a serious concern about how to deliver this information to parents so that I get a positive confirmation from them. 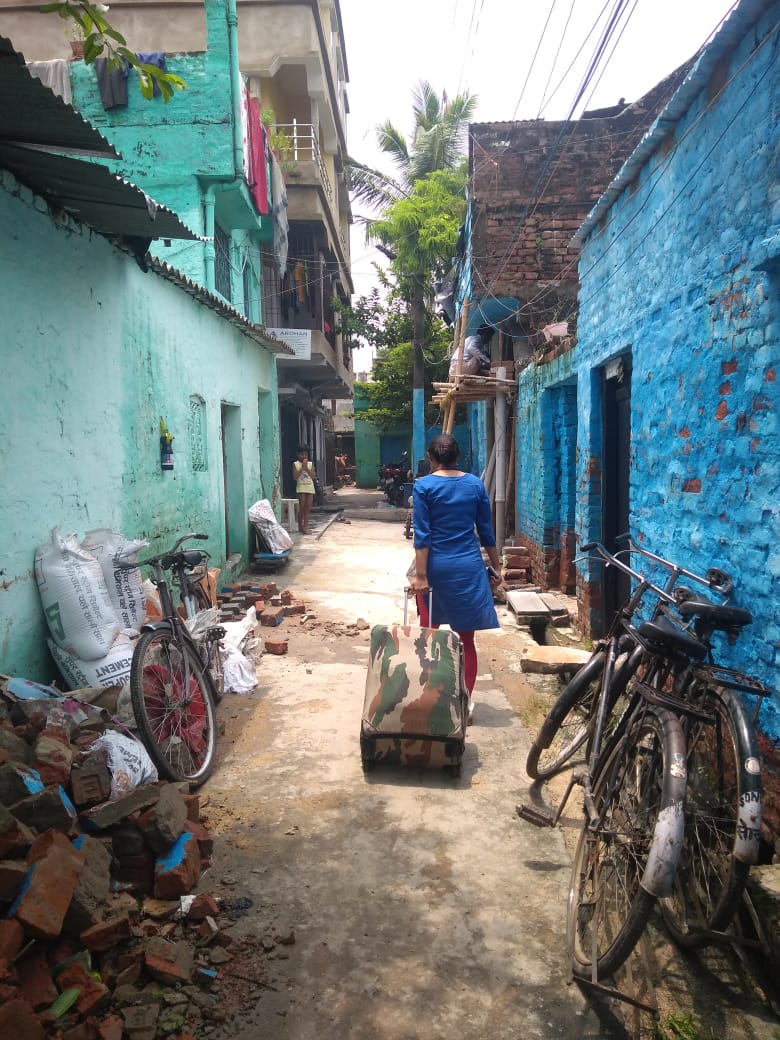 Within a few days, I stepped in Bihar and walked by an eight feet narrow street (my mind categorized it as narrow) which welcomed me with a rose shaped cow dung to be dodged. Climbing three floor of stairs to reach the office, I was filled with all sorts of thoughts. I was shown my living room, inside the office. Entering inside, I locked myself and couldn’t make sense of the situation or probably was unable to digest the fact that I was actually in my room in Bihar, a place I was still skeptical about. A mix of emotions blended in, with excitement, confusion, change, unpredictability and above all, the preconceived notions.

The next morning I was told to accompany a field staff to be exposed to the communities my organization was working with. I was excited. Seated as a pillion, I headed for the training of youth in villages. The benefit of sitting behind on a bike is that you can experience everything with eyes wide open and you aren’t bothered much by the road conditions and traffic. We reached our destination in a while. The first learning was that not all villages need to have a kuccha road. India, in its deep pockets, has developed more than we think. The training center was also a trainee’s home. We were offered tea by her mother. She said, “Abhi ladki log aayibe kar rahi hain, tab tak chai pijiye” (Girls are still coming, have tea until then). Yes, she had her head covered with her sari’s pallu but she also had a big smile on her face.

What comes in your mind when you think about the landscape of Bihar? I was expecting to walk in the village for lack of roads. There would be green farms all around and a lot of cow-dung. My heart came to my mouth when I was told to not roam here and there in the villages or nearby areas as it may have a few naxals who might question or trouble me. That was my introduction to the area. I stepped out with a constant apprehensiveness.

The other day, while commuting in a public jeep, I saw huge green palm trees on both sides. There were large mountains holding their eminent beauty. I got lost in that landscape. Having lived in Dehradun all my life, close to the Himalayas, I had hardly seen a mountain from its bottom to top standing tall just a few steps away from me. As we were getting close to the village, the nature kept unfolding its layers to us and I wanted to fix that scenery in my head.

Instead of being able to enjoy the ride every other day, I was falling into the trap of instructions given by my family and friends on how to live in Bihar. Every man on the road, whose eyes fell on me, felt suspicious. Each fellow passenger on local train had to be maintained a 5 cm distance from, so that none of my body parts or even my bag touches them.

Soon, I pondered on my actions and realized that I need to be more accepting. Walking through the roads became comfortable when I realized that people are looking not because they’re suspicious but curious as I was new in that place. On local trains, as I wouldn’t get a seat, I started asking any lady sitting in front of me, to place my bag on her lap and no one has ever denied it yet. My co-fellows in Bihar have mentioned how they have not experienced any instances of eve-teasing here while they have faced it many times in Delhi. One needs to understand that there are all kinds of people in each place and we shouldn’t just go by news headlines for the reputation of a city/state.

Bihar has a vibrant history and Munger, in particular, tops the list. It has been an ancient seat of rulers. The Munger fort on the southern banks of Ganges river had a succession of Muslim rulers.

Working on capacity building of youth here, I found their aspirations to be similar as anywhere else. They want to step out and make an impact. There is a lot of enthusiasm and as many boundaries for them as in others corners of the country. People here too, have stories of hope, change and courage. We need to stop making ignorant statements and start bringing out the good in people and places.